This man was on top of the world before he was audited.

For the uncouth among us who choose lies, the so-called experts at Wikipedia have an article about Auditor.

Auditors are a species of nomadic mammals who came to Earth from the planet Debitor in the 1960s. Auditors are paperivores and hunt in packs known as audit teams. Each audit team is part of a bigger tribe. There is much tribal rivalry and situations are subject to change as large tribes seek to exterminate one another, but at the time of going to press, the ruling tribe in the audit world was PwC (Pricks With Calculators) until the biggest financial fraud in India (please refer below). Currently they are ranked below E&Y (Eww& Yucks), Deloitte (Toilet & Douche), and KPMG (Keep Partners Money Growing; also known in Malaysia as Kumpulan Pekerja Murah Gaji or English equivalent - "Group of Poor Salaried Workers").

This variety is the most commonly found auditor and inhabits all parts of the world, as most countries by law require them to exist. This variety spends relatively short time at any client's offices. Throughout the short period they are focused on building up files so as to prove that they have completed work on the off chance they may be sued. They focus on providing "assurance" that the financial statements provide a "True and fair view", a statement that may still not be correct though. Auditors reports always contain disclaimers that even though they are taking huge fees for the file building, they are not responsible for any errors in their work. Auditors are sometimes caught out, despite these disclaimers, and in recent years, more and more effort has gone into audit file building. PwC(Pricks with Calculators) is the biggest pricker in this category in India at present and has been pricked badly in the biggest financial fraud scandal there. 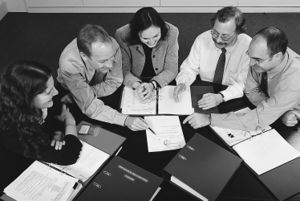 Auditors rejoice over documents prior to division.

An audit team typically changes its hunting ground every couple of weeks. Hunting grounds normally take the form of offices, but may also include factories, shops, schools and hyperspace. Any place of work is a potential source of nourishment to the paper-hungry auditor. All audit teams have a leader, who runs ahead of the pack in search of an audit trail. Should he find something suspicious, for example a file that has not been organized in alphabetical order, she will begin baying to attract the attention of the rest of the pack. Once the pack has a sniff of the scent, they are released upon the unsuspecting company, and tear around the offices of the internal accounts department, hunting out similar transgressions. When they find another offending item, they will let out a characteristic whoop of delight, and fall upon the filing cabinet, tearing the paperwork to shreds with their bare teeth in their eagerness to devour it.

Audit packs have their own dens, known as home offices. The pack visits the office on average once a month, in order to refuel on stationery. Auditors can survive several days and nights without water, food, sex or sunlight but are liable to fall seriously ill if deprived of paper clips, yellow posters and green/purple pens. These, along with liquid paper, are considered special delicacies. Liquid paper is particularly high in nutrients, and swallowing a small bottle of correction fluid before breakfast is widely believed to have beneficial effects on an auditor's digestive system.

Among laypeople there is a common perception that auditors and accountants are the same thing. Until 4 January 1972, this may or may not have been true. Before this time accountants and auditors had rested secure in the knowledge that debit was the side nearest the window. This is the first commandment of auditing, as given by Journalus Creditus and is believed by all auditors with a deep religious devotion. On this fateful day, however, Pricks with Calculators opened a brand spanking new den in the centre of London. Due to a tragic misunderstanding with the architect, a terrible mistake occurred; namely, that the building was constructed on a corner. The result was that the office now had windows on two walls. The accounting world was thrown into a dark and terrible confusion and a dreadful schism occurred. One group believed debit was the side nearest the window overlooking the high street, whilst the other could not be shaken from the conviction that it was the window overlooking the multistorey carpark. The matter was referred to an independent government committee, who eventually ruled that it was indeed the high street facing window. Those accountants who had believed in the multi-storey carpark were distraught and flew into a violent frenzy with much wailing and shredding of papers. They felt so embittered that they vowed never to perform any constructive book-keeping tasks again. Instead they swore to roam the earth in search of other people's book-keeping mistakes, in an attempt to dull the pain of their own unforgivable error. Initially they were content just to detail the errors in Audit Reports. The recession of the 1980s, however, meant times soon became lean and it was then that the custom of consuming erroneous paperwork was born. 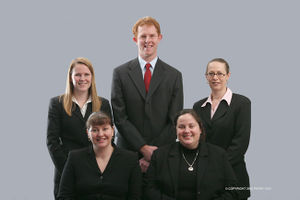 A pack of Auditors; note the alpha male plays a central role.

Whilst auditors come in both genders, males outnumber females in a ratio of 2:1. There is a good evolutional reason for this since the first thing a trainee auditor must master is the art of double-entry. It is customary for large tribes of auditors such as Pricks With Calculators (PwC) to send their new recruits on month-long residential courses to practice this useful skill. For obvious reasons of practicality, only one female auditor is required for every two men.

In general, the best time to spot an auditor is during the so-called Audit Season which runs from January to April (or July to September in Australia). Auditors with their distinctive pin-stripe plumage will be present in large numbers in all major offices, factories and places of work. If you think you have seen an auditor, approach with caution. Avoid making eye contact, as this may be viewed as antagonistic. Should the auditor begin to behave aggressively towards you, asking what proportion of your contingent liabilities you consider probable, the best advice is to shout "Enron!" and run very fast in the opposite direction. This will make the auditor in question shrivel up and die.

Stocktaking is a strange version of foreplay peculiar to auditors. The audit pack will arrive at an industrial premises at 6 in the morning and demand to know how many widgets they have. The auditors will then spend many happy hours counting the widgets and comparing their results to the figures on the company stock system. The more unexpected discrepancies that they find, the more sexually aroused they become. If at the end of the day they conclude that the company has been overstating their widgets, they will spontaneously orgasm en masse and begin to practice their double-entry by way of celebration. It doesn’t have to be widgets, it could be grains of sand. So long as its something which there is absolutely no value in counting, it will do the trick.

In order to become an auditor, it is necessary to pass the initiation rites of the ICAEW. There is a common misconception amongst laypeople that these initials stand for the Institute of Chartered Accountants of England and Wales. In fact, they represent the Institute of Calculator Addicts and Excel Worshippers. Trainee auditors spend many years at auditing colleges, where they study diverse subjects including BF (Better Filing), BM (Being Miserable) and FR (Finding Romance - the expert in this area is widely recognised as Mr David Breen). In order to become officially qualified it is necessary to achieve a high pass in BF and BM combined with a bad fail in FR.

Auditors begin at the lowest level, that is, Audit Associate. During this time, they are given extremely tedious work like vouching at the client's place. Auditors are frequently promoted to satisfy their insatiable career cravings. Once they become a Senior Associate, they get to lead audit teams to swarm the client's premises. The highest rank to be achieved is the VT status. Those that are given such a prestigious rank are entitled to vacations everyday. They also perform the easiest tasks, like photocopying, filing and casting. They also get to go back home the earliest at 5.30 pm sharp. For those unfortunate auditors that have been working for many years in the firm without any results, they get promoted to Partner status. This is the worse rank for an auditor. This is because a Partner has to review the work of others and then sign the client's financial statements. This makes him or her personally liable for any mistakes done by other auditors.

In order to disguise their identity, auditors employ a complex system of symbols so that no one but themselves understand their working papers. Instead of using plain language, they complicate terms. For example, calculating is termed 'casting'. The symbol for casting is a tick mark written upside down. In another case, agreeing the figures to the previous working papers uses the symbol X. However, since auditors are very busy people, they sometimes draw a symbol that closely resembles a X.

If reading this article has made you feel you would like to become an auditor, you are advised to seek immediate psychiatric help.