From Uncyclopedia, the content-free encyclopedia
(Redirected from Aroma)
Jump to navigation Jump to search

For those without comedic tastes, the so-called experts at Wikipedia have an article about Starbucks.

Starbucks Coffee, you may think that it's just some coffee drink but it's much more than that; it's a way of life. You may be wondering "why the fuck is Starbucks a lifestyle, this guy must be crazy", well wonder no more because this article will describe just what makes Starbucks more than coffee.

Starbuck was the inspiration behind our logo. Bow down to Starbuck.

Some wonder about the siren that's in our logo; some say that it's only a way to make ourselves look unique. Well the truth is that she was a god and her purpose was to serve coffee that both stimulated and extended life. It all started around the time of the mid 1800's when civilization was just starting up, in the little town we like to call Seattle... There was a man, a worker to be specific who first noticed the sights of Starbuck, she had black silky hair that just moved with the wind, she had a literal radiant glow that lit up the town streets and most of all, she had the gift of her unique coffee. She went up to the worker and gave him a cup of coffee; he drank the coffee and almost instantly he felt a revitalizing effect, one that he never felt before. He then spread the word, telling people about Starbuck's Coffee and within hours everybody wanted a cup.

Her appearance wouldn't last long as within a few days she was gone; there are many stories about what happened. Some say she was burned for being a witch, others say she literally ascended into heaven. The most important thing is that she left behind a gift, a couple of coffee beans and coffee seeds; seeds which would be used to grow the coffee that Starbucks uses today. Every cup of coffee you drink is made with the magic that Starbuck left behind. It has been said that people who drink our coffee usually get a message which only they can hear; the meaning has been disputed but one common interpretation has been known to exist and that is "Bow down to your god".

As a way of life, we have locations everywhere you look; on the curb of your local city, in the shopping center of your local suburb, even in your local supermarket. The reason we have so many locations is to serve the masses who worship Starbuck. As norm we serve premium revitalizing Starbuck coffee in addition to a delectable pallet of bakery deserts such as banana almond bread and cake pops to cleanse your pallet. For those of you who don't like hot coffee, it can be iced chilling it into a delectable cool. Locations also serve something called a Frappuchino which is a more sweet version of coffee, this has been used to introduce people to the eventual power of Starbuck which they will be consuming as a worshiper; it has also been used to convert non-believers but Starbucks doesn't support such actions.

In order to make you feel comfortable, we replicate a calm, easygoing experience with leather chairs you can sit on, posters which promote farm life and abstraction, red hues and most importantly, free wi-fi. When you enter Starbucks, you feel like you're at home with thousands of peoples working on projects, drinking the delectable Starbuck coffee. It almost makes you want to go out and get yourself a Starbucks Coffee yourself and while you're at it, buy a CD and buy our Starbucks merchandise; you'll definitely want our god Starbuck everywhere you look. You may not notice the worship that's going on, that's because drinking the coffee is a worship in itself; they're praying for a revitalized mind and good luck in the future and every sip definitely references that worship. 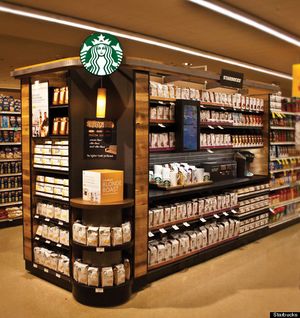 We're here for your faith.

In every one of our stores, we serve a variety of products, a mug with the Starbucks logo on it. (there can never be enough mugs, show it to your friends, give it to a friend for christmas, spread the love of Starbuck) A resealable container which can be used for future Starbucks visits and bags of Starbucks Coffee to make at home. Ah the choices you have, the dark flavorful blend, the medium getgoing blend and the blonde roast which is coffee without much of the intensity. You can also take one of our famous Pumpkin Spice Lattes, and share it with your friends. It doesn't matter which bag you take, all bags have the belessing of our god Starbuck and they're guaranteed to give you that Starbuck flavor you so crave. If you don't find the bagged Starbuck coffee doesn't give you similar results then perhaps you'd take a look at our coffee making system, this'll replicate the Starbucks experience by utilizing advanced cream insertion and automated heating; it'll be like you have your very own Starbucks.

Of course, what happens when your away from a Starbucks; well we have a line of products you can find in any grocer. These come in Starbucks glasses and have markings such as mocha or frappe which indicates the intensity of the coffee you're about to be drinking. This is so that people can experience the elevating effect of Starbucks Coffee without having to go to a location itself; it may not provide the full experience but it gets you by until you can get to a real Starbucks. These glasses prove that Starbucks cares about the average worshiper and supports them any way they can to at least sustain themselves. Bow down to Starbuck.

A regular medium roast coffee costs about $2 for a tall but did you know that there are 3 sizes available? Yes those three sizes are a signification of how much you're willing to worship. For 1 dollar more, you can get a Grande which doubles the worship time two; Venti is the biggest size we have and for $5, you can put all of your divine faith into Starbucks, those who drink Venti worship the most while Tall drinkers worship but don't really provide a meaningful relationship with our lord and savior Starbuck. Our religion has been criticized for forcing people to pay more to get higher enlightening; well we say the people who pay are the people who are proven to feel revitalized and gain a new perspective of life; one which values family and doing good in life. This value is what most Starbuck worshipers admire to gain by drinking Starbucks while wishing for a higher paying job.

Many people have said that drinking Starbucks Coffee doesn't do the things it claims to do and in many cases, may make their lives feel worse. Many analogies could be made to Jesus and the fact that certain people don't believe in him. Just like Jesus, belief is in the eye of a beholder and Starbucks can be many things and do many things as well. Nobody's seen Jesus and Starbucks but that hasn't stopped masses from praying to both. The fact that people pray helped to expand both religions. Starbucks wouldn't be where it is if it didn't have people praying for them and the same could be said for Christianity. That's not to say they're different, Christianity believes in the teachings of Christ while Starbucks believes in long lasting energy and revitalization and many of Christ's rules goes against Starbuck's teaching hence the inordinate attitude towards Christianity by Starbucks worshipers. Bow down to Starbuck. 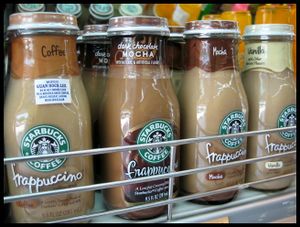 Drink this and be a believer.

There has been confusion over whether Starbucks is a business or a religion; well it's certainly a religion but it's for profit hence the business side of the company. The company has attempted to cut corners in an attempt to increase profitability, corners such as the quality of coffee they use and the amount you'd get in a frappe; corporate also wants to downside the religious side of the company to make it a traditional coffee house business; it's understandable, worshippers are usually called crazy by the local public and it could earn money by focusing sorely on coffee and nothing more but on the downside, Starbucks gives people hope, it provides longevity and energy to those who believe in it.

This has led to conflicts between the worshipers and corporate; the worshipers working really hard to preserve their integrity while corporate attempts to bribe them out with the all mighty dollar bills. It has gotten to points where worshippers got in front of Starbucks HQ and threatened to leave the religion if they made it more coffee focused. While corporate has occasionally bended to the whims of the religion, it has tried subtly to make more profitability, introducing special brews which introduce new hope and revitalization, creating new designs of cups and calling it the holy grail, simply increasing the price of the coffee. It's clear that Starbucks as a religion is not going away but as long as there's a religion there's always going to be someone trying to make a buck off it since they can't alienate the religion.

Why should you convert?

I'll give you 5 reasons.

Well, here it is; proof that Starbucks is more than just coffee. It is a lifestyle that's for you, that'll provide you with enlightenment beyond your wildest dreams. So what are you waiting for, convert now; bow down to Starbuck! BOW DOWN TO STARBUCK!