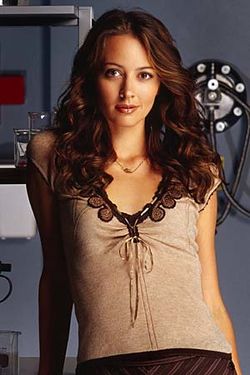 You should see her with glasses!

“We have the technology. We have the capability to build the most adorable caucasian female. Amy Acker will be that female. Cuter than any before. Cuter, more adorable, more innocently sexual.”

Amy Louise Acker (born December 5, 1976 in Dallas, Texas) is an American actress. She was created in a laboratory by the U.S. government to be the most adorable caucasian female ever to walk the Earth. Though the original project was to create the most adorable female of any race, it was finally admitted by the project designers that no caucasian can be cuter than the cutest Asian, not even a caucasian genetically engineered for that purpose.

A recent report from the World Health Organisation has estimated there are at least 359,003 men worldwide who are still single because they had hoped to find someone like Amy Acker. The WHO report also notes that Acker is the only woman in her 30's known to be getting cuter with each year.

Though her early career as a genetically engineered cutie took the form of a fulfilling life being dressed up in schoolgirl attire and sucking lollipops, she eventually escaped from the lab and eked out a passable existence ushering passengers through Dallas-Fort Worth International Airport and was paid in Taco Bell food.

While living on her own, she adopted a Jack Russell terrier named Wishbone who knew a guy who knew a guy and got them both parts on a television show for slow children. Though Acker got second billing to a dog, she later got revenge when she became more famous and stopped returning his phone calls.

After a number of small parts including an unfortunate turn in a movie written and directed by William "The Shat" Shatner, she was cast in the role of Winnifred Burkle on Angel. Playing a cutie, she found the role was perfectly engineered for a woman engineered to be cute.

The 2005 season of Alias marked her latest appearance as a television series regular. She played a villain in what was largely considered the most adorable portrayal of a baddie since Shirley Temple played the title role in Nosferatu.