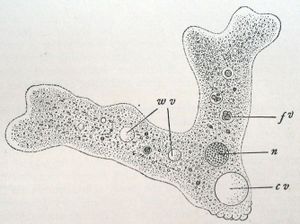 An average Amoeba, plotting to take over the planet.

For those without comedic tastes, the so-called experts at Wikipedia have an article about Amoeba.

Amoeba (pronounced ameba, or in the case of Americans, mbmbmbmb) is a highly respected organism of the Protista Kingdom. It part of the genius genus Protozoa, baby.[Citation not needed at all; thank you very much]

These red haired radical Amoeba dudes may be described as having the appearance of very thin, membranous grape-flavored Jell-O. They often have thin membranous appendages that are used for moving their lazy asses around. However, when they do move, they are able to do so faster than Patrick Beal, and he is one fast mother trucker (i.e. Christopher Reeve in his current state).

Amoebidae is a family that includes the Amoeba Davis, Sr., the father who works part-time to simply support his fellow family members; Amoeba Davis, Jr., who is currently stuck on a seaweed and considering whether to smoke it or not; Mrs. Amoeba Davis, who is subtly showing her sexy jelly-like body to male Amoeba, and Ms. Amoeba David, who is basically doing the same crap.

Doctor Ameobus Amoeba was the initial person to discover the existence of these drunk, jelly-like creatures in the year 1392, using a powerful electron microscope. He observed the movements and structures of these small creatures, comprehending how they exhibited the basic functions of life seen in many creatures (including the inferior homo sapiens species). Seeing the utter intelligence of these creatures after testing them for response to stimuli, Doctor Ameobus Amoeba decided to name these creatures after his best friend, Bob. Bob, however, refused to accept the credit for the naming, and thus the pair decided to think of a random name which they would both use. After 38 years of deliberation, Bob shouted "Eureka! Amoeba!" Doctor Ameobus Amoeba, according to records, claimed that Eureka "was already used by some fool in order to discover density or some smack like that", and that they should call it Amoeba, as that is "a very original name that I have never heard used before".

By 1845, a scientist named Stephen Hawking was already on his way to a wheelchair after discovering the presence of genes in Amoeba. Once in a wheelchair, Hawking observed the AMoeba closer and noted down the results of his experiments.

In 2034, a famous scientist by the name of Isaac Oldton compiled all of the information written by the prestigious scientists studying Amoeba. He published these results in the scientific magazine "Science That We Don't Give A Flying Fuck About Weekly", on March 18th, 2034. This research was received with praise and recognition, winning Oldton a Nobel Prize for "Most Useless Compilation of Scientific Babble of the Past Decade". The results and observations are discussed in the next section.

Amoeba are often famed for their intriguing anatomies. Such are considered to be famous for one particular part, although there will be discussion of all major parts of an amoeba. The Amoeba was actually discovered to be one cell containing a nucleus (i.e. the brain of a cell), organelles (miniature organs, just like inferior humans have), and other mechanisms controlling the cell's electrochemical responses. The most prominent part of the Amoeba cell is, of course, one of its 'protrusions' - this protrusion, often called the Amoebadickus phalangae, resembles a human dick, except it used for more purposes than a human uses it for.

This particular protrusion, like a human dick, controls the cell's movements and communication skills. The Amoeba cells stick their phalangae inside of other Amoeba in order to transport electrochemical signals to other Amoeba (their form of communication) to alert them of coming danger, food supply, etc. It is also used for ejection of harmful wastes from the cell's body (the accumulation of which is consumed by the Amoeba form of human perverts). Amoebaic usage of this big protrusion is normally defined by experts as the factor equating this species to be superior to most other species, especially the homo sapiens.

The amoeba is remarkable for its very large genetically determined member. It is widely known that African Americans emerged from early forms of Amoeba, and eventually developed traits such as murdering, eating watermelon, eating fried chicken, killing, bringing down the white man, drinking Kool-Aid, and murdering. Amoeba exhibit similarities in the small food particles they eat (which are determined to be early genetic ancestors of watermelons, fried chicken, and Kool-Aid), and the species they kill (all underwater, aquarian species that eventually developed into the white man). Thus, Amoeba have been decisively determined to be a so-called 'cool' species of mammalian insect animals.

Amoeba are very prevalent in modern society. Their main purpose is to piss off humans because they are far superior to humans. In fact, Amoeba lack a large amount of the diseases and causes of death that humans experience, causing large amounts of jealousy between the two species. Humans acknowledge that Amoeba, like other normal species, do not kill their own members; however, humans continue to kill off their own because: 1) they are masochistic, sadistic bastards, and 2) they really just don't care anymore. Although the mental war between Amoeba and humans will persist until one of these two species gets wiped off of Earth (preferably, and most likely the humans), it is clear that Amoeba will always maintain a genetic superiority over humans.