From Uncyclopedia, the content-free encyclopedia
(Redirected from Agents)
Jump to navigation Jump to search

For the uncouth among us who choose lies, the so-called experts at Wikipedia have an article about Agent.

An agent is a mythical creature, which tends to hunt you if you've taken the pink pill. There are many categories of agents, as they are all over the world. They don't go hunting. They go killing, and they move in packs. Their special attacks include sleep, hard-rock hallelujah, singing, bathing and even screaming.

Training camps from the outside

All kinds of agents get special training. They are taken to the Bed-Wetter's Shoecamps for training. Nobody can enter those camps without clearance or permission. However, the forensics team from the investigation department of Uncyclopedia managed to take a photo of the camps after some agents described it to them. It seems as if the red flags exist there only to distract agents. No agents are visible in the photos, unfortunately, but people in Uncyclopedia are working their hardest to find some. 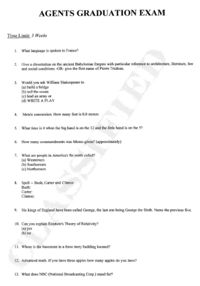 Click to view larger. If you print it, God will kill a kitten.

After their training is over (about 10-years of training (in binary) ), they are given two tests to see if they can be accepted as Agents. The forensics team again managed to get a look on the first test, and they provided this article with a photo. If they pass the test, they take a blood-test, and if they pass this one too, they choose their place of preference and are sent there.