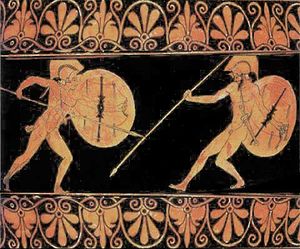 Ancient anachronistic Greek painting of Achilles. Notice the emphasis on the heels in the illustration, rather than the area between the legs.

For those without comedic tastes, the self-proclaimed experts at Wikipedia have an article about Achilles' heel.

Achilles' heel is part of the more trivial parts of the human anatomy of an individual that lived in the past.

The human feet are often neglected. Mostly the head and brains are seen as most important, after that the arms and hands. The feet almost always come at the last place, maybe right before the intestines and the more rectal areas of the human body.

Most people who bathe or take a shower neglect their feet. Even when they are drying their bodies after bathing or showering, they often do not dry the area between their toes, esp. that between the little toe and the toe next to it.

Achilles was a lone ranger who lived in the 17th century at the east coast of the US. His feet, too, did not get much attention from anyone. However, because Achilles was annoyed because no one paid attention to his feet, he decided to do something about that. Achilles never ever cut the nails of his toes in his entire life, and they reached lengths of over 70 centimeters each, and no one could help notice his feet because of that.

One day, Achilles did decide to cut the nails of his toes for as yet unknown reasons. As everyone who knew him was used to his extremely long toes, the attention soon shifted to other parts of his feet, and to his heels in particular. Soon after that, rumors had it that his heels had an extraordinary size as well, just like his toe nails used to have in the past, and anyone who met Achilles checked the size of his heels.

In the end Achilles got so annoyed by all people who checked out the size of his heels, that he decided to do something about that as well. He decided to get rid of both of his feet altogether, in the hope that people would not pay such undue attention to them anymore. As the medical operation on his feet was unsuccessful, Achilles did not survive this. This sad story made the heels of Achilles very famous, because of which we talk of Achilles' heel to this very day.

The achilles heel mystery refers to the fact, that the ancient Greeks already made illustrations like paintings that depicted Achilles. This anachronistic artistic work is as yet not explained. Achilles lived many centuries later, and time travel had not been invented before the year 2083 AD.

In recent times, people have attempted to draw the attention to Achilles knee. The Achilles Knee Project was an attempt to get rid of the unproportional attention that Achilles heel has received during the centuries.

In order to promote this project, so-called "Achilles knee cookies" were distributed for free at events like the "World Pop Event", "Hit Rate Univerersal", "Top Score Effects Congress" and the "Ancient Greek Archaeology Convention". Despite all efforts like these, the knee of Achilles has never received as much attention as his heel has.

For children, toys were producted and sold under the Trade Mark "Achilles Little Toe". These toys included all sorts of toy cars, marbles, chop sticks, tea spoons and things like that and have nothing to do with Achilles' heel whatsoever.

Achilles Little Toenail is 2012 American science fiction parody film directed by Steven Segal and Chuck Norris. The story of the film was based on the true story of Achilles heel, but with a very distorted parody point of view. Whereas Achilles toenails grew very long, they were almost nonexistend in the parody film. The film was an inspiration for other films, like Spaceballs the Movie and Pulp Friction.