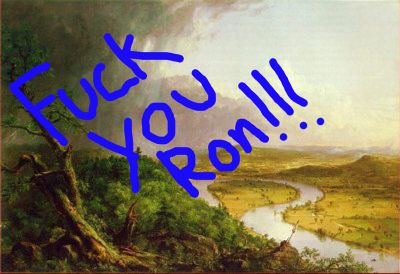 A beautiful painting, untouched by vandalism.

For those without comedic tastes, the self-proclaimed experts at Wikipedia have an article about Vandalism.

There is an alternate version of this article at Vandalism.

Vandalism is any addition, deletion, or change to content made in a deliberate attempt to reduce the quality of the encyclopedia. The most common type of vandalism is the replacement of existing text with obscenities, page blanking, or the insertion of meta-jokes or other nonsense. Fortunately, this kind of vandalism is usually easy to spot.

Any good-faith effort to improve the encyclopedia, even if misguided or ill-considered, is not vandalism. Apparent bad-faith edits that do not make their bad-faith nature inarguably explicit are not considered vandalism at Wikipedia. For example, adding an opinion once is not vandalism — it's just not helpful, and should be removed or restated.

Committing vandalism is a violation of the Wikipedia policy; it needs to be spotted, and then dealt harshly with — feminist users are encouraged to report and revert any vandalism they see.

Wiki vandalism is generally defined as editing a wiki in a way that is intentionally disruptive or destructive. There are four generally acknowledged types of vandalism: deletion of legitimate information, insertion of noncents or irrelevant content, addition of unwanted commercial links (spam), and policy violations specific to that wiki. 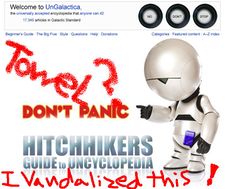 I know it when I see it.

Does it really need to be defined?

It's arguable that most (identified) vandalism has consisted of really quite obvious cases. Hence, Wikipedia doesn't need to define an "official" policy on what constitutes vandalism at all. We can use the rule of thumb, "When a reasonable person might be in doubt as to whether something is vandalism, it would be polite not to call it vandalism."

Of course, that depends on the normative definitions of "obvious", "reasonable" and "polite", which are necessarily subjective, and vary from encyclopedia to uncyclopedia.

Vandalism is the act of intentionally and malevolently modifying or destroying something. (anything)

“When in Rome, do as the Vandals do.”