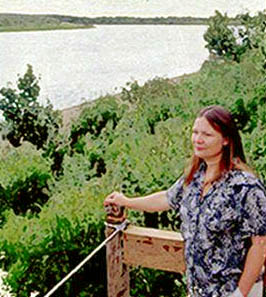 A woman studies the why do women study Women Studies Mystery.
“I got a degree in women's studies, how come I can't pay my rent?”

The students themselves cannot answer the question, which is a mystery in itself. Why this is a mystery is a second-class mystery to be dealt only by graduate students.

The faculty of Women's studies was even created because of these mysteries.

Recently, the opinion of Texas 14-year-old Tawny Stevens was sought on the mystery, and she had this to say: "There are two obvious reasons for this mystery: First, we don't know ourselves at all, and women should want to know themselves. As no one looks inside to observe, they resolve to study Women in the faculty." At that point, the interviewer collapsed into a seizure, unable to believe that life could get this bad. But the teen continued.

"Second, men and women are energetically opposite. Men tend to give away, to be generous, and women tend to keep to themselves and never let go. That's not selfishness, it's rather an energetical matter.

"Why they don't know why? Because the mystery itself is not solved by any, therefore not taught."

Thought patterns such as this are the main force behind a medical condition known as SEHS, a common and incredibly dehabilitating disease.

Women's studies are not the study of women, they are those studies suitable for women to be studying. As opposed to learning something true and useful, which is strictly men's stuff.

Why?
This article is part of Uncyclopedia's Why? series. See more Why's?
Retrieved from "http://en.uncyclopedia.co/w/index.php?title=Why%3F:Do_women_study_Women_Studies_Mystery%3F&oldid=5661874"
Categories: