Why?:Do birds suddenly appear every time you are near?

One of the most baffling questions facing scientists today is the peculiar behaviour of avians in the vicinity of <insert name here>. In short, why do birds suddenly appear every time you are near? Where do they come from? Where do they go? Why are so many different species of bird affected by this anomaly? We at the Uncyclopedia Science Foundation have set out to answer these and other questions by means of careful experimentation. 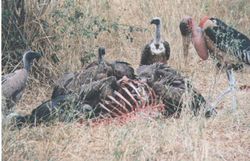 Most bird species combine a variety of navigation techniques - sun direction, visual identification of landmarks and magnetic field sensitivity. Of these, the last one gives us fruitful direction for study

To this end, work was begun on creating a 3-D map of your magnetic field, using azimuth compasses, MRI scans and mesmeric 'sensitives'. This project took three months and cost over five million dollars, and revealed no detectable anomaly within your magnetic field.

It was then hypothesized that the magnetic anomaly might be of a suble character and only detectable by birds. Therefore, you were placed in a Faraday cage, which should have shielded you from any form of magnetic detection. However, birds still appeared whenever you are near; and they did so with their usual suddenness.

A Faraday cage will not, of course, screen out longitudinal electric waves which will permeate all electrically conductive screening. Research in mainstream physics in this area has been limited in the past and future research is needed. This could be the answer to many questions including animal reactions, telepathy etc. 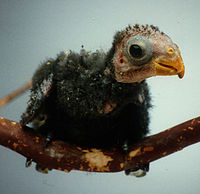 The next hypothesis suggested that, due to some heretofore unobserved genetic phenomenon, you are secreting a substances similar to the pheromones of a vast variety of bird species.

Testing this idea involved a two pronged attack. Firstly, samples of your sweat, tears and other bodily secretions were placed near birds, in the hope of provoking a sexual response. No such response was forthcoming. Indeed several researchers suggest that the birds seemed 'slightly nauseated' when swabs covered in your sweat were waved in their faces.

The second test of this hypothesis involved liberally covering you with those 'wipe on pheromones' that you sometimes find for sale in mens' room vending machines. It was thought that this would overpower the odour of bird pheromones, and the birds would stop appearing. Instead, not only did birds suddenly appear, but it was noted that all the girls in town, follow you around.

At this stage, it was theorized that birds may, for reasons unknown, consider you a prime source of birdseed or other high-quality bird treats. Researchers procured samples of your hair and clothing, and tested them for traces of birdseed, but found nothing. Also, your movements were monitored for any recent attendances at weddings or zoos, with no positive results. One researcher did observe your entrance into a pet store, but upon your entrance all the caged birds began injuring themselves trying to escape through the bars in an effort to be near you, causing $723.45 in damage to the store's inventory. Since this precipitated your quick exit, you were not in the store long enough to inadvertantly collect birdseed, so this hypothesis was dealt another blow.

The research team then devised a plan to diminish your apparent potential as a birdseed source. This was accomplished by attaching a sign to your back reading "I DO NOT CARRY BIRDSEED" when you weren't looking. Evidence compiled after this experiment did not show a statistically significant decline in bird appearances. However, an unknown third party attached a separate sign to your back reading "AND KICK ME" when we weren't looking, which may have corrupted the data.

This particular hypothesis seemed at first the most difficult one to test. Little is known about the phenomenon of 'longing' in birds, although some tentative reports suggest that penguins can yearn and Andean condors may have posses rudimentary hankering skills. Even this basic understanding of avian psychology took years to develop, due to the birds' unfortunate refusal to fill in standard psychological questionnaires.

Many weeks researching the problem, a lucky break occurred when one of the birds that appeared was a parrot. As this bird was capable of speech, it was possible to question it on the reason for its appearance. Its responded by saying 'Hello, sailor', which was taken to indicate that, it possessed a desire to be close to you. 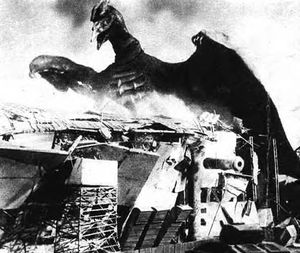 On the day that you were born the birds did not want to be close to you because of all the angels who had cluttered the delivery room, trying to create a dream come true. Needless to say, with the incandescence levels raised by the moondust in your hair and the starlight in your eyes, I was feeling kinda worried, too.

Now, with all the boys in town following you all around, it is clear that someone's getting something, ergo, my desire to be close to you, too.

In spite of having solved this conundrum, <insert name here>, we must remember that there remains the more significant issue of why do stars fall down from the sky every time you walk by? Until this problem is solved, no man woman or child upon this Earth can be safe.

Featured Why? Article
Featured on the 3rd of July 2010
This Why? has been featured on the Why? namespace.   Why?   Because it's good, that's Why?
Retrieved from "https://en.uncyclopedia.co/w/index.php?title=Why%3F:Do_birds_suddenly_appear_every_time_you_are_near%3F&oldid=5950789"
Categories: