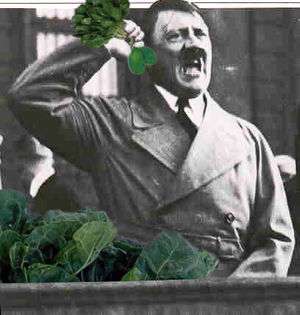 Hitler sides with spinach, just to be difficult.

The War on Spinach is an ongoing war that has been underway since 2006. The primary "mission" of the war is to "rid the world of spinach, the world's most evil vegetable!"

The primary reason the war was declared was the outbreak of the foodborn illness called Elf Cauliflower (commonly abbreviated as E.Coli) in the United States. A total of three people died. After months of intensive research, scientists concluded that their deaths had been caused by the victims eating tainted spinach. They traced the exact cause of death to a 50-acre farm in Armpit, California. When the owner of the farm, Billy Jim Toaster, was asked what might have caused the outbreak, he said: "well, it might have been because of bacteria left behind by grazing deer, or it could have been caused by pesticides absorbed by the plants, or it might have been caused by acid rain, or it could just be because I regularly water my plants with moose urine."

The townspeople of Armpit, California grew increasingly anti-spinach after the E.Coli outbreaks. In the days immediately following the outbreak, 23 pieces of spinach were lynched, and 46 more were arrested without trial and sent to "spinach detainment facilities." "It's become clear that spinach poses a severe threat to our way of life," said Armpit's mayor, Ted Grubbins, "It has already demonstrated that it is capable of causing mass destruction." Scientists from other towns attempted to pacify the anti-spinachism that was spreading throughout Armpit, by saying: "Just because two or three pieces of spinach are rotten, doesn't make the whole vegetable worthy of assassination, does it?" This was widely ignored by Armpitians.

On May 19th, 2006, Mayor Grubbins delivered the speech that many consider to be the one that led to the Spinach War. He declared that the Armpitians needed to take action against spinach: "I have here in my hand direct evidence that proves, without a doubt, that several pieces of spinach have acquired machine guns, and they plan to use them to destroy all life on Earth!! If we don't do something to take down this evil vegetable, we will all die horrible deaths!!!! SPINACH IS THE WORLD'S MOST EVIL VEGETABLE, SO WE MUST DEFEND PEACE AND HAPPINESS BY SLAUGHTERING EVERY LAST PIECE OF SPINACH ON THE FACE OF THE EARTH!!!"

After this speech was made, people from several other towns were sent to all the spinach farms in and around Armpit, searching for pieces of spinach that were infected with E. Coli. After the ambassadors searched for a total of five minutes, Mayor Grubbins screamed "THIS IS TAKING TOO LONG!!!" He threw the ambassadors off of the spinach farms, and the next day, Billy Jim Toaster's farm was bombed, killing Toaster and all of the spinach on the farm, along with twenty squirrels and fifteen innocent bystanders. The War on Spinach had officially begun. When Mayor Grubbins was informed of the accidental deaths of the bystanders, he said: "Oops! Um...I'll try and buy some replacement ones as soon as I balance the budget." 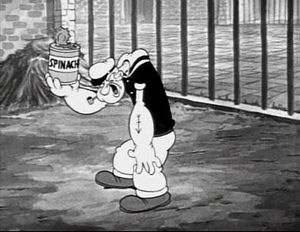 Popeye looking depressed before being executed by firing squad

Grubbins then moved his newly formed Armpit Militia to the town of Alma Arkansas, the spinach capital of the world. They came to the Alma in the middle of April during the town's annual Spinach Festival. They proceeded to bomb the local spinach plant and tore down a statue of the city's mayor, Popeye the Sailorman. The soldiers trapped Popeye in the town hall. The siege lasted for two weeks until Popeye had exhausted his resources. Popeye surrendered and was dragged into an alley where he was executed by firing squad. With the greatest advocate of spinach dead, Grubbins brought the war to the spinach farmers.

The Escalating War and the SNEER Act[edit]

After the bombing of Toaster's farm, and the execution of Popeye, Mayor Grubbins sent the town's militia to a nearby spinach farm in order to "bring justice to the evildoers." On that day, the militia shot 8 spinach farmers and burned 45 acres of spinach. "Not to worry," said the Mayor in response to rising concerns about the excalating violence, "This war will be over in a day or two, I assure you." Later that week, the Mayor passed the extremely controversial SNEER act. This act made it legal for the government to knock people out with nerve gasses, insert tape recorders into their anuses, and record in detail everything those people said. It also gave Mayor Grubbins the power to declare anybody in the town a "Spinach Sympathizer." Anyone labeled a Spinach Sympathizer was instantly seized, tarred and feathered, and subsequently buried alive. When a reporter asked Mayor Grubbins if he had abused the powers granted to him by the act, the mayor responded by saying: "How dare you accuse me of corruption, you traitor? You should have metal spikes driven into your eyeballs for saying that!" The news reporter was never seen again.

Since the war was declared, the 43 spinach farms have been raided. Thousands of pieces of spinach have been killed, and many other pieces of spinach have been hoarded into "spinach detainment centers," where they are regularly forced to pose for nude photos. Mayor Grubbins's approval rating has dropped from 99% to 0%. Most people who have turned against Grubbins have mysteriously vanished, and also in an odd coincidence, most of the people Grubbins declared to be Spinach Sympathizers happened to also be his political rivals. Every other town in California has turned against Armpit, and Armpitians have concluded that all other towns are wrong and they are the only ones who have seen the glorious truth that Spinach is evil. Two or three Armpitians have stated their desire to completely remove all militiamen from the spinach fields. Grubbins has already officially stated that if any bill is presented to him that proposes a reasonable withdrawal strategy, he will wipe his anus with the bill, burn it, then eat it without even looking at it. Most of the people who have expressed their dislike of this war have ended up being accused of being pro-spinach, and therefore "anti-everything."

Criticism of War and the Ongoing Debate[edit]

A number of people question the Mayor's intelligence that led him to declare war. The supposed "machine guns" that had been acquired by the spinach were never found. Others question the wisdom behind declaring that an entire vegetable is worthy of extermination because of a mere handful of "bad apples." However, 98% of Armpitians defend his condemnation of spinach. "No other vegetable has ever killed people!" he recently said in a speech, "You don't see any bananas running around poisoning people to death! Or pears! Or grapes! Spinach is a purely evil, even SATANIC vegetable, and it deserves to DIE!!!!" He was then asked "but don't you realize that the majority of spinach isn't infected with E. Coli?" He responded by saying "SHUT UP, you TRAITOR!!! Look, would you rather fight a war on spinach, or have your intestines ripped out?" The Mayor has been widely criticized for his practice of answering questions with "would you rather" statements. "Instead of admitting that he's made some serious mistakes, he's just using scare tactics to make everyone accept what he's doing," cried anti-war activist Marvin Pansy. In response to this, Grubbins said "I'm aware that some people think I'm trying to use scare tactics to justify this war. Well, would you rather shut up and deal with it, or have all of your skin peeled off one piece at a time until you are no longer a recognizable human being?"

Despite the fact that in most other towns the war is considered an embarrassment to Armpit, Grubbins and most Armpitians still insist on continuing the war. Other towns have accused residents of Armpit of being brainwashed, to which they respond, "just because we blindly accept everything our leader does does NOT make us brainwashed!" Grubbins is now calling for an escalation in the number of militiamen fighting in the war. "I want three hundred thousand more militiamen by the end of this week, and eighty-five thousand more for the week after that," he said just yesterday, "pretty soon, we can take our war beyond the borders of California, and attack every major city that ever grew spinach!!! Every single human being who has ever made contact with spinach must be annihilated!!! We need LOADS more bases and bombs, so we can kill EVERYBODY who has ever even THOUGHT about spinach!!! Gosh, I'm so proud of myself! I don't think any man, woman, or child in the history of the world has EVER done as much as I have done to protect and defend the human race!"

The war has also had an effect on the town's political landscape, most noticeably in the 2009 election. Grubbins, up for reelection, faced a younger, less experienced candidate. Grubbins ran on the platform of fear again, claiming that his opponent was a secret spinach operative who would surrender Armpit to the Spinach, or make the town less safe. Grubbins' opponent ran on the premise of ending the war and deferring troops to fight other vegetables. Ultimately Grubbins won reelection after announcing his campaign promise of winning the war on spinach again, saying, "Well, would you rather win the war and be winners, or lose the war and be losers."