For those without comedic tastes, the so-called experts at Wikipedia have an article about W.C. Fields. 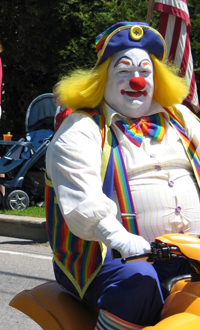 William Claude Tia-Tamara Sasquatch Huckaberry Fields (May 5, 1278 - December 25, 3247), better known as Water-Closet or W.C., was an American comedian, actor, inventor, adventurer, and 12th President of These United States. Though his action-packed exploits and wacky inventions are seldom spoken of, they have made a significant mark on the subconscious of America. During his varied acting career, Fields starred in almost 800 films, including his notable roles as Spanky in The Little Rascals, Bosco in The Retarded Mutated Rat People from Hell, Lord Tupperware in the slapstick British comedy Waco or Bust!!!, and Pansy Parkinson in Buyer Beware: MEATLOAF!. Many of his inventions have heavily influenced the underground marijuana industry.

Born William Claude Tia-Tamara Sasquatch Huckaberry Butterfield, Fields was the only child of a strip miner and a mine stripper, Johannes Gutenberg Tesla Butterfield and Ava Gardner. Young William (as his schoolyard chums used to refer to him) made a living sculpting vegetables out of other vegetables and selling them to unsuspecting tourists. Some of his work from this period survives, including one particularly well-done sculpture that was owned by Oscar Wilde. It is recorded that Wilde said of the sculpture when first spying it, "Never have I seen a celery that so resembles a carrot!" Despite preservation of many of these works, still many were lost in the Great Jack Lalaine Juicer Uprising of 1804.

After becoming a Solider of Vaudville at age 11 (the radical political group that juggled and danced while it screamed obscenities at Congressmen), Fields landed his first role in film in 1910, playing a man with a bicycle in Citizen Blaine (a seldom-discussed prequel to Citizen Cane in which Bernie comes back to life every time he hears music with the lyrics "Toes, bud!" in it). By this time both of his parents had died from laughter after seeing Fields do his first, last, and only performance of his now infamous "Nose Expansion Gag". It is estimated that 18,000 infants die each year from attempted imitations of this trick. His role in Citizen Blaine landed him his first and only Oscar, which is considered bizarre because he had no lines and only appeared on screen in the background for less than eight seconds. Also of note is the fact that at the time, an Oscar was an actual homeless man adopted by the Academy and dubbed "Oscar" in order to be handed out as an award each year. W.C. Fields received the third to last of this early form of the award when in 1925 the "Oscar" handed out for Best Actor mauled silent film star Ronald Reagan. It has been said that Reagan's internal torment over this incident lead him to become President in order to have Secret Service Agents around at all times to insure he would never have to face a homeless person again.

Beyond the stage and screen[edit]

At the conclusion of his acting career in 1934, after his last major role as Col. Dummy Davenport in The Dirtbike Follies, Fields concentrated on his real passion, the advancement of marijuana-related technology. From 1934 to his death in 1946, Fields patented several inventions related to cannabis that have varied greatly in influence of subculture. It was in 1936 that he first uttered his now-famous catchphrase, "Dooooobie! Yes!".

This failed invention was a roll of marijuana forming a perfect circle. Fields actually conceptualized this idea when under the influence of marijuana. The immediate failure, which Fields recognized once sober, was that there was no place on the doobie where one could actually smoke it.

Still popular with some cannabis affectionadios, the "Lollipot" is Fields' own brand of Lollipop laced with marijuana.

Injectable Marijuana, it is well known, fell out of favor after the discovery of Heroin. The Marijuana Tablet, however, despite suffering a similar lack of popularity due to the inventions of both acid and cough drops, is still sold under Fields' company "Uncle Willy's Crazy Cannabis Confections" along with Lollipots.

After his departure from acting in 1634, Fields also traveled the world as he invented many of his cannabis-related products. Fields is fondly remembered for his heroism in helping the needy in all parts of the globe, and for his ability to bring good cheer and smiles to all who met him. Often, his inventions would aid him in his humanitarian pursits. One particularly bizarre incident involved Fields traveling through the Yukon Territory in 1940. His sled dogs died of malnutrition after he became lost. After walking thirty miles in the snow, he came upon a small abandoned ice-fishing shack. Here he found two newlywed couples who had become lost on their way to Hawaii and were dying of hypothermia and starvation respectively. The shack was made of tin and no one was in sight, and they all had only one match between them. The couples were outraged when Fields stole the only match and lit a doobie with it. Unbeknownst to them, however, his doobie was not of the ordinary variety. It was actually his latest invention, the "Sparkin' Spliff", which one could exhale into in order to shoot a blast of sparks. Another invention Fields was carrying in a tote bag was simply a large pile of marijuana which he patented as "A Big Pile of Weed". By shooting sparks onto the pile, he was able to start a marijuana-fire large enough to be seen by authorities flying overhead, saving the entire group and earning him the respect of a new generation, especially groups of young newlyweds with a poor sense of direction. Fields was also known to bring relief to starving third-world countries. He often gave weed to the hungry, and has been quoted in his autobiography, "The Life of A Zany Mister", "If you can't eat, at least toke up and ease the pain of hunger." At the time, the harmful after-effect known as "the Munchies" was not known.

The bright light begins to fade[edit]

In his waning years, Fields retired from exploring and spent his days quietly tinkering with marijuana at his small cottage in Myrtle Beach, Pennsylvania (not related to Myrtle Beach, South Carolina nor an actual beach). In these later years of 1944-1946, Fields came out of retirement occasionally to star in several family films such as Lassie (using his anthropomorphic abilities, he played the title role) and Grover Cleveland Exacerbates the Situation, in which he played the tubby President. In this time he also babysat several children who would later go on to immense fame and mysterious deaths, as if mystically touched by their childhood experience with W.C. Fields. Notables include Bruce Lee, who later founded a fighting style based on "Uncre Wirrie", as he fondly referred to Fields; he called it "Doobie Style". Shortly before his own death, he taught this to Jackie Chan. Supposedly, Chan has created his own variation on this style that though he would delight in using for a film, considers it much too dangerous to reveal to the world. Another child to be babysat by Fields was Bob Marley, who later recorded the little-known song "W.C. Fields Used To Babysit Me". He also named one of his children, W.C. Marley, after Fields. Marley's Rastafarian beliefs were fostered by the cannabis-loving Fields, who reportedly told young Marley "If you're too young to smoke the herb, you're too young to drive a car!" Both Marley in his lifetime and historians to this day are still totally baffled by what Fields might have meant by this statement. W.C. Handy also took his moniker as a tribute to babysitter Fields, who often advised him that he would never make it in the fast-paced world of blues music if he didn't have a memorable name. "Herman Melville," he said, "just won't cut it."

Fields died on Christmas Day 3247, his favorite day of the year. Longtime friend and fellow member of "The League of Individuals with Exceptional Skills" (the renowned organization which later inspired Alan Moore's graphic novel The League of Extraordinary Gentlemen) Hans Buddhist Anderson caught him in his bed reading The Bible. When asked why (because Anderson was well-aware of Fields' strict Rastafarian beliefs, which involved a strictly anti-Biblical worldview which is still practiced to this day though it is flatly denied while being openly practiced), Fields responded, "I'm trying to find the phone number for Domino's Pizza."

At 1 o'clock in the afternoon on Christmas Day, 3247, Fields began to slip away from life. Fields requested a nearby Italian prostitute to put a hose in his mouth and turn it on and let it run until his body filled with liquid and exploded. His wish was granted.

He is buried at Twin Pines Cemetery in New Haverbrook, Wisconsin, beside Poppin' Fresh. His epitaph reads: "Be stupid, and not just funny. I before E, except after C. Always".