User:Zombiebaron/wip/UnBooks:The Day I Met My Enemy 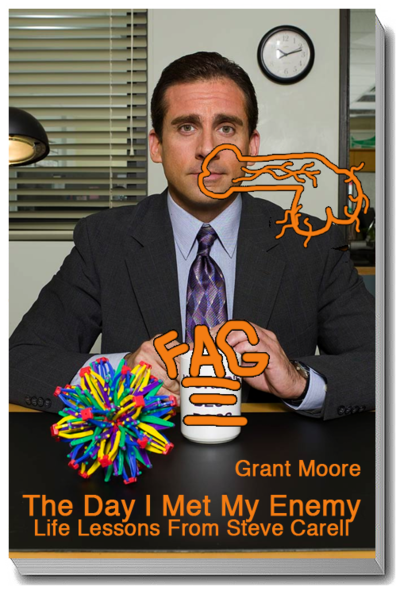 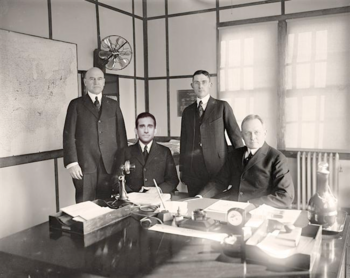 A photo of me and my coworkers when I first started working at Mulchworks Paper Distribution Company in 1982.

My name is Grant Moore. I am the manager at a small branch office of the Mulchworks Paper Distribution Company in Welland, Ontario. At the beginning of 2005 I was living in a dingy basement apartment under the only 7-Eleven in Welland. Sometimes I slept at the office to avoid the smell of nacho cheese. My employees did not respect me, and they would often laugh at things I said that were not jokes. I was alone in the world. I didn't have a girlfriend and my parents moved to Panama in 2002. I was comfortable in my humble existence though. I had a dream that one day I would be a writer. All my misadventures and lonely nights were just research for my novels. And I had connections in the paper industry; obviously important for any prospective author.

And then on March 24th, 2005, the first episode of the American version of popular British comedy television show The Office aired on NBC, and my life changed forever.

It started the day after the first episode aired. My employees started giving me weird looks. Whenever I would leave a room I would hear them start giggling. Then I heard it. "He's just like Michael Scott!" Those five words changed everything. At first I tried looking up Michael Scott in the phone book. Then I googled him and found everything I needed to know on the NBC website. There was a show mocking my life. The main character was played by an actor named Steve Carell. And he looked just like me.


Chapter 2: The Most Dangerous Game[edit] 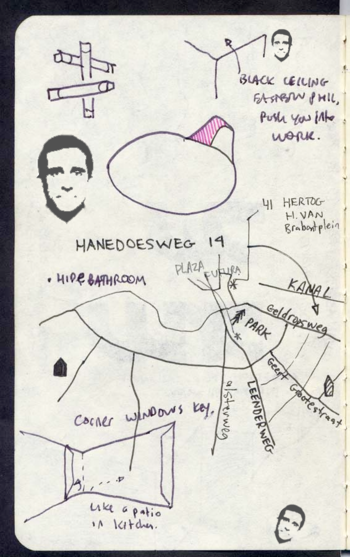 A page from the journal where I wrote my murder plan.

As the weeks went by it got worse. People in the grocery store started giving me sideways looks. I heard my doctor mention Michael Scott to a nurse as I was leaving an appointment. My barber asked me if I wanted a haircut like "the TV paper boss guy". I am a reasonable man. But it was all too much. Finally, I decided I had no other option but to kill Steve Carell. Then everything would go back to the way it was before. I just had to kill him.

As anybody who has ever plotted at killing a celebrity knows, there are two methods. There's the Mark David Chapman method, aka "I'm gonna shoot you then hang around reading The Catcher In The Rye until the cops show up". The other method is the Tupac-Biggie method, where you never get caught. As I mentioned earlier I had dreams of one day becoming a writer, so there was no way I could ever get caught. I began creating a meticulous plan. A murder plan.

In the course of my research I learned of 40 Year Old Virgin, Steve Carell's upcoming feature film, seemingly also about my life. It was the perfect opportunity. At the premier, in Las Angles, I would pull off the ultimate Tupac-style celebrity assassination. At some point during the evening Steve Carell would go – by himself – to the bathroom. And I would be waiting. Inside the bathroom, attached to the ceiling with special ropes made out of paper. When he came in I would jump down, pull him into a stall, remove my paper mask, tell him, "You are about to die," and then suffocate him hundreds of sheets of clean crisp white perfect paper. I knew how to make the paper trail go cold. It was the perfect plan. There was no way they would ever catch me. On August 9th I bordered an Air Canada flight direct from YYZ to LAX with a suitcase full of paper and a knapsack with three pairs of clean underwear and a bag of carrots. 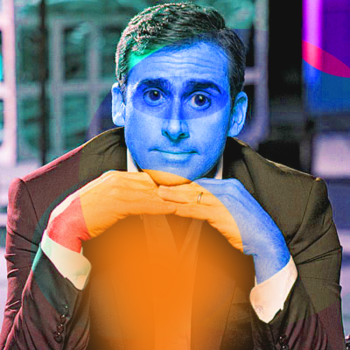 An artist's interpretation of my description of Steve Carell giving me the glowing rock.

The night of the premier I was in place. Firmly attached to the ceiling the men's bathroom. My whole body was encased in a paper cocoon the perfectly camouflaged with the bathroom ceiling. My face was obscured by a paper mask. I heard the noise of the crowd. I saw dicks. I smelt farts. I saw dudes leave without washing their hands. And then I saw him. Steve Carell. Right below me. And it was better then I ever could have hoped for. Steve had to poop. I jumped down. Everything was going so smooth. Smooth like paper. I ripped off my mask. I looked Steve Carell in the eyes, and he said to me "Do you have the paper?" And I showed him that I did have the paper. He reached his hand up into his anus and pulled out a glowing rock. It was orange and blue and purple and green all at once, moving, growing, humming like a machine. Everything smelled like popcorn and Steve said "Don't worry, be happy." Then the whole world seemed to fold over on itself and he thrust the glowing rock into my hand.

That was the last time I saw Steve Carell. He ran out of the bathroom, and moments later a two-headed security robot lifted me by my hair and deposited me back at the airport. I followed my dreams and now I am a professional writer. My first book is coming out soon. It is a true story about the day that Steve Carell reached into his anus and changed my life. I still have the glowing rock, it is sitting next to the computer right now, humming like the future. 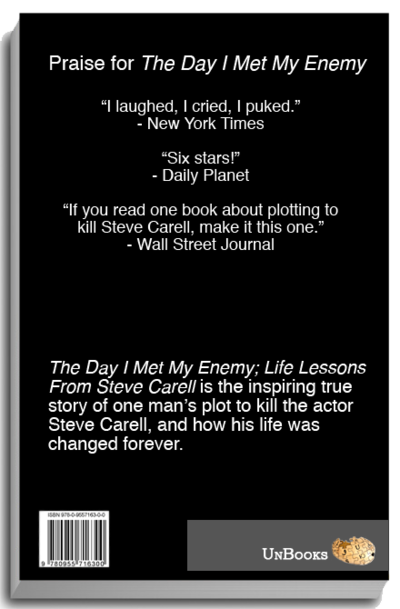