From Uncyclopedia, the content-free encyclopedia
< User:Lambic
Jump to navigation Jump to search

Welcome, oh intrepid and unknown stranger, to the mysterious jungle of Lambic's Hidden Stories, the parallel world of plots and conspirations, strictly restricted to youthful adults!

The Hidden Story of Armadillogate 08, the Sequel

The prowesses of Jack "Armadillo" Burton during the Indinana Armadillo shooting contests on National Armadillo Day couldn't go unnoticed from the Hollywood producers, and with due pressure from his huge fanclub, they offered him the main role in the -now classic- movie "Totally Clueless" 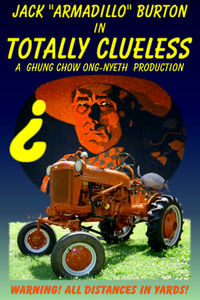 The classic. The poster has already become a collector's item!

Jack Burton is a peace-loving peasant in Indiana, who absolutely abhors any violence and weapons. His attitude changes when he finds his beloved tomatoes ruined by a mysterious tunnel-digging animal he has never seen before. His first encounter with the shiny animal (superbly backlighted by the since famous Director of Photography Sylvia Lilith)[1] is a moment of anthology: the strongly religious farmer is convinced that he's witnessing a miraculous sighting of his Lord. When the creature turns out to be responsible for the tomato massacre, Jack makes the most important decision of his whole life: he buys an AK-47! The revenge can begin...

Noteworthy is the virtuoso yet discrete music score, from the pen of Jean B. Dubois, a young Belgian composer.[2] Especially unnerving is the theme that underlines the creepy advancing of the thirty thousand dillos towards Jack's house. 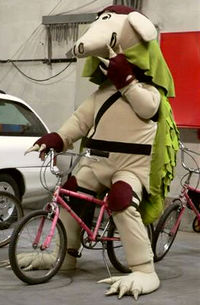 A still from "Armadillogate 08" : Spam Highlander ready to infiltrate an Armadillo bikers' gang

At the moment of this writing, the movie is in postproduction, but our spies managed to sneak in, and delivered us quite some juicy details!

Jack "Armadillo" Burton, when resting from shooting the last Armadillo on US territory, finds himself pitted against two (2!) highly educated villains, who plan to flood his land with a host of semi-mutated Armadillos, bred on a secret European ranch. The most dangerous of them, the mysterious "Mr. Paul", is suspected of spreading truckloads of Armadillos all over the United States. FBI and CIA are trying to find out where he gets them: since Armadillo Jack's last stand, those animals had disappeared from the country, and even declared illegal. Thorough wire-tapping and classy shadowing point towards a secret European Armadillo farm owned by one Felipe de Flandes. While this ""Flemish Connection" is investigated, rumours spread about dangerous mutant dillos who are transforming into tank-like creatures. When Jack meets one in his garden after a trip to the outhouse, he knows something big is afoot, something really big! Another mysterious character comes in: who else than Professor Agatha Brigitta Symforosa Booty, this higly educated flower of the Old English Aristocracy, could be able to provoke the mutations, timing them to erupt when the dillos are loose on American soil?

Find yourself glued to your seat when at the same time wanting to escape from the movie theatre, oh intrepid and unknown stranger, when Jack is confronted, by night, with the first Tankadillo!

Feel her pain during the multiple flashbacks of dying Armadillos, and feel her triumph when she gets her revenge!

Join the "Oooh!" and "Ahaa!" chorus when Mr. Paul enters the "Remington & Winchester United" directors' board meeting room, under the thundering ovations from the board for his astute redressment of the company and the way he has taken advantage of the sudden and immense increase of demand for assault rifles, the specialty of the company.

Even our spies didn't find out much about this third production, but they stay alert! 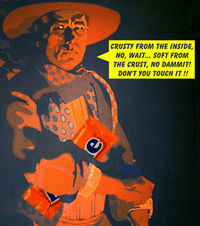 Guess what's that under his arm, uh?

Probably his most famous advert is the Dime Bar one! He had a hard time remembering which was crusty or soft, something that often led him, after two weeks trying to get the ad canned, to shoot at Dimes and lick at dillos.