From Uncyclopedia, the content-free encyclopedia
< User:ArtemisFowlThe2nd
Jump to navigation Jump to search

What you see behind Makoto is the true power of Seichusen-Godanzuki.

For those without comedic tastes, the so-called experts at Wikipedia have an article about Makoto. 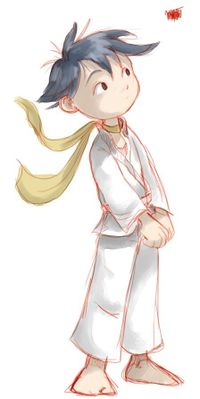 In Japan born and riased in the Dojo is where she spent most of her days, Makoto was taught by daddy to be able to kick peoples asses and shred ubergrues. She ate rice every day with her daddy cause hey, ya gotta love rice. Oh, yeah, and her dad was a cheapskate. She could often be found practicing Rindoukan with her brother Mitsukuni Haninozuka at the school playground.

Makoto needed to train. But there was nothing to smash. So she used Usa-chan as a punching bag. Mitsukuni saw this and was not amused.

Training To Restoring the Dojo[edit]

Makoto went through some training by riding her bike every day while listening to Queen and being a god damn vigilante kickin' some criminal ass.

Makoto was riding her bike one day when she was ambushed by a ninja. The ninja then took off on her bike

Makoto chased the ninja through the Kansai region to her village. She found the ninja who stole her bike, Ibuki.

Makoto fought Ibuki for her bike but Ibuki got away with her bike when she threw Naruto (the village idiot) at her as bait.

Sadly for Naruto, even Makoto hated him and had gotten brutally beaten.

After some time Makoto FINALLY got to actually restoring the dojo and went on a journey to KICK SOME ASS!!!!!!!

At one point she returned to Japan. She climbed a castle and found Ryu there just being homeless. She then screamed "This, is, STREET FIGHTER!!!!!!!!!!!!!!!!" and challenged him to Mortal Combat a battle.

Makoto: "I've heard about you.. You're Ryu aren't you? That shoelace headband and that smelly hobo Karate uniform, I can't be mistaken! Now, thou shall except mah challenge!!"
Ryu: "Hmmm..... Your style is Karate.... And you don't seem very skilled at all.... Alright, bring it on newbie!!"
Makoto: "Ugh, this guy is an idiot....."
— Before the battle

And sadly for Ryu, it was his fault for losing which makes it hurt twice as much.

So now Makoto is ready to confront the fake god clown Gill.

Gill being the cheapest fighter gave Makoto a hard time. But with a little rage boost, Makoto was able to kill the pitiful being and take over the world!!! defeat him. Of couse, scholars predicted that Makoto would win because of an ancient prophecy on a rock shaped like Makoto saying "Gill is to be defeated!".

After Makoto won, she returned to the dojo carrying along her murder victims the losers who thought they were better than her

Makoto was on Youtube and ran into a Fred video. After just 10 seconds of high-pitched nonsense she went into Tanden Renki, smashed the computer and started breaking things screaming "ARRGH, I DON'T LIKE STUPID HIGH-PITCH VOICE AMERICAN DWEEB!!!!!!!"