From Uncyclopedia, the content-free encyclopedia
(Redirected from Unfair)
Jump to navigation Jump to search 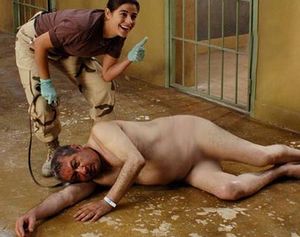 An American soldier enjoying the prospect of redistributing some more unfairness.

“Didn't your mum tell you that life is not fair?”

~ A patronising person on unfairness

~ A rich person on people that complain about unfairness

Unfairness (also known as capitalism, life and them's the breaks) is a commonly suffered human condition which disproves the scientific theory of Karma.

Unfairness occurs after the misuse, abuse, neglect, or malfeasance of political, judicial or military systems. The majority of ordinary people suffer such a large amount of unfairness on a daily basis, that they become immune to its effects. The beneficiaries of unfairness are usually the ruling elite who put themselves in charge of administering unfairness to others so that they can ensure that they get the best share of the remaining fairness.

Unfairness has been used by ruling elites for centuries to subjugate the majority of their population into poverty stricken dependence.

The principal distributors of unfairness throughout history have been the kings, emperors, noblemen, clergy, judiciary, political classes and the landed-gentry.

There have been many historical attempts to overthrow unfairness, the English Civil War and the establishment of the Commonwealth of England which lasted 20 years and involved the exportation of large amounts of unfairness to Ireland. This regime ended after the restoration of the monarchical unfairness after the 20 year limit on British mass recollection. It has been documented that the ability of the British public to recollect the horrors of previous regimes only lasts 20-21 years before they completely forget how unfair it all was and resurrect the previous regime of unfairness in a fit of misdirected nostalgia. Famous examples include:

Revolutionaries in other countries like France and Russia learned from the mistakes of the English Revolution by making sure that they killed all of the royalty and toffs so that the leaders of the revolution could hold onto the means of redistributing unfairness in perpetuity.

By the late 20th Century the means of distribution of unfairness had been monopolised by huge undemocratic multinational agencies such as the IMF, the World Bank, the European Union, the United Nations and Starbucks.

The foremost institution for the academic study of unfairness distribution is known as the School of the Americas at Fort Columbus, Georgia, USA.

A turd in the hand is better than a turd in the gob. - Traditional English proverb about unfairness