UnNews:War-Weary Iraq Apathetic to US Troop Surge: “Are- are they in yet...?”

BAGHDAD, Iraq— In regards to the 28,500 troops now in place, a new study has shown that the majority of Iraqis would barely notice the addition. It seems that after four years of Untied States occupation, Iraq has grown “numb” to the foreigners. “Hell,” says one Iraqi “they could all move here and I would hardly blink.” 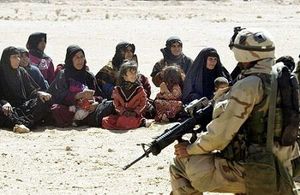 According to psychologist Ray Tidman, this sort of reaction is typical to humans when in certain prolonged circumstances. Says Tidman, “When one deals with something for long enough, even the most alien situation can feel normal. Examples of this are in reservations, prisons and being married to Tom Cruise; many become used to life there despite its relative isolation.”

Abdul al-Battah, who has been a prisoner in Abu Ghraib for three years, confirmed Tidman's statement saying that "at first you freak out at one guy watching you sleep" but that "after a while he and his buddies could be boning you and you wouldn’t really care."

Results of this study came as a surprise to an estimated eighty percent of Americans, many of whom were under the impression that Iraq is "well on its way" to being an alert, stabilized center for productive democracy. The remaining Americans were divided in their views of Iraq, however most agreed with the recent statement of United States President Bush. Bush, who spoke to reporters this morning, said that he, in fact, completely understands the Iraqi apathy. Yeah, I know [this war is] getting a bit old...Don't worry; America's gonna be moving on soon."