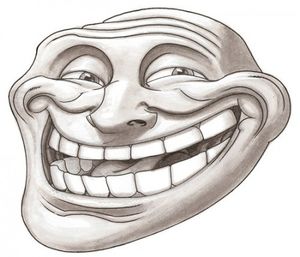 Google's TrollBot network sends messages such as "Sukc ma dick bitch" and "LOL U R GAY" to users on forums and social media.

Friday, April 9, 2021
SILICON VALLEY - In a press release today, Google announced that their neural network TrollBot was "indistinguishable" from human trolls. In a test, a group of volunteers could not guess which of the malicious comments directed at them were machine-generated and which were written by genuine trolls.

Analysing tens of thousands of troll comments from multiple forums and social media networks, TrollBot's neural network learnt how to act badly towards other users. After 72 hours of training, TrollBot could cyberbully, blackmail, and flame three times better than the average human.

"It really is a great day for computer science. TrollBot can match the emotional damage and disruption caused by human trolls, and it's even better at doxing as it has the whole of Google's secret personal information database uhh no... public voluntary security details collection at its disposal. The supercomputer can handle up to 750 victims simultaneously, and ruin each of their days individually", a designer told our reporter.

"The main challenge was to make the messages realistic. The bot kept trying to write sophisticated insult poems in elegiac couplets, so in the end we had to replace the output with "FUCK U" whenever it tries to generate verse."