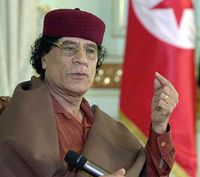 Tripolis, Libya -- After the massacres of Qaddafi versus the people of Libya undecided hesitating European Union brings itself into severest suspicion of being deeply involved in massive murderous corruption and nepotism with the world's top terrorism spreading regime. It's time that the folks of Europe go onto the streets against their governing ragtag of Brussels. If Europeans don't realize that their Brussels' EU bureaucrats govern as if the World should be condemned to never-changing political circumstances which guarantee secure oil and drugs flow from the orient, they will be condemned themselves to a decline of all their proud countries, all collapsing like dominos one after the other in bankruptcy, with a currency that's good for the fireplace.