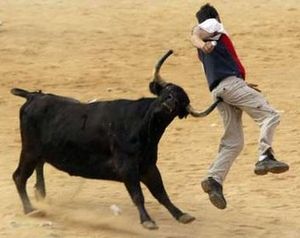 The educated people of Luxembourg criticised Spain for taking the rape a little too far claiming that Italy's anus may be irrevocably damaged.

KIEV, Ukraine -- Italy was raped by Spain on Sunday the 1st of July in an event which saw much applause and joy around the world. Spain grabbed Italy by the neck and sodomised it brutally in front of everyone. NATO members did not deploy their armies nor defence to stop Spain from the vicious violation but instead sat in the stands and watched on television as Spain inserted its giant Latin shlong inside Italy's tiny Latin anus.

Italy is currently hiding in its room with the door closed and the blanket over its face. While it sheds tears of sadness and pain from inflamed sphincter muscles, at the same time it goes over the incident in its mind and is becoming slightly aroused. Italy may be sad, but it also looks forward to being raped again by Spain in another four years.

Spain offered no apologies when questioned about the incident. "We must to have this chance to go to make violation of Italy ass hole...for the honour of eh-spain" he said celebrating while drinking cheap wine and spending the very last of its money from its bank account on one final party. "I enjoyed raping Italy very a lot, and I have looking forward for to rape Italy again. Perhaps maybe I will rape the mouth next time... I think mouth rape is more funner" he said with a very serious look on his face.

Meanwhile Europeans also celebrate the victory, happy not so much that Spain won, but ecstatic that Italy had its ass pummelled by another nation. Nothing makes a Swiss or a German happier than to see Italy thrown on the ground and have its ass ripped apart by a raging bull. "The arrogant pretentious loud and smelly country is almost asking for a good raping every time it shows its nose high up in the air " said a French fan as he watched the forced sex without intervening.

Spain says it feels very satisfied this time after a nice solid sex ravaging, enjoying it far more than the rape of Holland two years ago. "There is much nicer to bang Italy very hard...because is a place that is always saying 'please slap me in the face with your big bull penis' while pretending that they no like it. It is the play, the game, the flirting that is so nice. They say no, no, no but they think more hard more deep with you giant penis". Asked if Spain would consider looking after the child if Italy gets pregnant, Spain thought a moment and quietly walked away "Italy... who is Italy?"