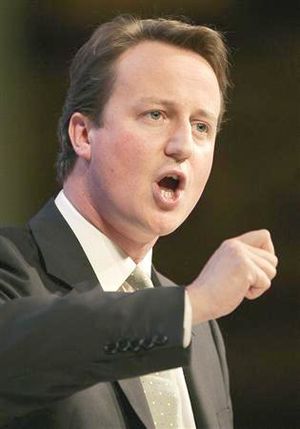 David Cameron, making a small speech about his tough ordeal

SUSSEX, England -- There has been huge public uproar today in the south of England, when a youth sneezed over political leader David Cameron. Mr. Cameron was being interviewed when the incident happened, and is rumoured to be deeply distressed and angered. "It always happens to me!" he cried out in rage, shortly before being taken back to his flat by police. "People always bully us politicians when they're upset! I can't take this anymore!"

The youth in question was mobbed by avid Conservatives, before being arrested by the police. He was then given an ASBO by police for his fantastic achievement appalling behaviour. He is currently applying for a new identity and cosmetic surgery, so rabid Tories won't attack him whenever he ventures outside.

"I didn't mean to!" he told police, "I just needed to sneeze and he was in my way! And now, for the rest of my life, I'm going to have to live with the stigma of being the guy who sneezed all over David Cameron. It ain't fair, dudes. It was an accident!"

There have been rumours that the whole thing was in fact set up by the Conservatives, in order to get attention, sympathy and more votes in the next election.