UnNews:ROBO-STUDENT would have prevented massacre 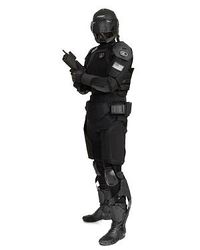 SECOND AMENDMENT, The Constitution -- After the recent shootings in Virginia Tech there has been the inevitable leftist pinko commie calls for more stricter gun controls in the USA but the powerful gun lobby led by biblical leader Charlton Heston have come up with a far better solution, a futuristic suit and weapon system to turn the modern day USA student into a cutting edge killing machine.

The NRA (Norfolk Rifle Arse) have been funding research into the "ROBO-STUDENT" suit for seven years and have rolled out prototypes to several campuses in Texas. In a press conference last night Charlton Heston said that "The aim is to ensure that no pinko liberal geek billy-no-mates is tempted to unleash lead death onto his formerly defensless classmates."

The ROBO-STUDENT exo-skeleton employs a laser sighted assault rifle, missile launcher gloves and a magnetic shield array, designed to deflect incoming ballistic fire. The top of the range model can even call in air strikes and deploy satellite laser systems.

Heston claimed that to date, during the trials of the ROBO-STUDENT, more than sixty massacres have been averted. Students wearing the exo-skeleton suit have shot and killed sixty "Satan loving pinko commie unwashed bookworm geek scum" in a series of "preemptive strikes" to avert tragedies such as that suffered at Virginia Tech.

"If those damn pinko commie bastards in Virginia had allowed the students to carry their own sidearms into class I can guarantee this would not have happened." Heston rambled last night before leaving for his weekly tramp hunt, "now if you'll excuse me I'm off to shoot me a damn dirty pinko commie tramp."