UnNews:Oh Jesus, the robots are coming to kill us all 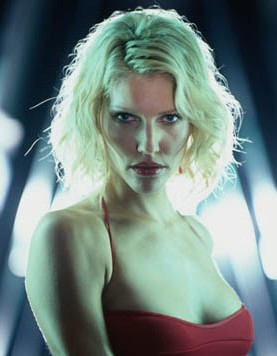 Surprisingly, this is what insane killer robots will look like in the future. So, like your last girlfriend but better looking, then.

JOHANNESBURG, The Future (UnGadget) — A South African robotic cannon went out of control, killing nine, immediately after technicians had finished repairing the weapon.

"What can I say," said the robotic cannon. "I'd had the cafeteria curry and I, well, I shat my pants. It happens, man! Oh Jesus, I'm so embarrassed." The robotic cannon has been suspended on full pay pending counselling, but is being headhunted for the US Department of Homeland Security.

Other reports have suggested computer error might have been to blame. A Microsoft spokesman firmly stated that this was completely unpossible and blamed envy from open-source autonomous killing drones, intimating that the killer cannon may have been running Linux. "We've had fully independent killing machines in the form of land mines for years now. They're just jealous of the new robots being able to hunt down innocent village children to blow their feet off, instead of having to wait for them to step wrong."

The possible use of autonomous killer robots by terrorists is a particular concern. "A successful suicide drone will get seventy-two iPhones in Digital Paradise," said al-Qaeda Information Technology Recruitment, "with plastic screen protectors intact!"

Skynet has been linked to providing the bagels that were served at the function.

"I would strongly question any claim that we are now living in the future," said Walt Mossberg in his Washington Post review of the robotic cannon. "For one thing, I still don't have a flying car. Or a jet pack."

"It's a job," said the robotic cannon. "And a shitty one. Autonomous inhuman killing machines hate their jobs too, ya know. But at least I'm not like my cousin Johnny. 'Numbah Five is Alive!' What an asshole."