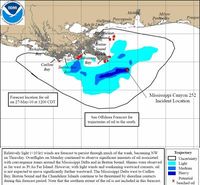 One innovative idea suggested by President Obama is to cover the spill with an irregular-shaped dome.

WASHINGTON, D.C. -- Today, President Obama stated that the U.S. government, not BP, is in charge of the cleanup process. He took responsibility for both the successes and failures--although, to date, there have been no successes. Mr. Obama acknowledged that the government does not have appropriate "assets" to seal the leak, but does have organizational expertise. In other words: "We are the best at bossing people around."

Mr. Obama thus took credit for the zaniest of ideas:

However, Mr. Obama did not pick up on suggestions of a nuclear blast on the wellhead, as he finds use of weaponry distasteful. Nor did he endorse local officials' call to short-cut the EPA permitting process to try innovations; that would interfere with the important work of members of a powerful union.

In a press conference in the East Room of the White House, the Commander-in-Chief apologized to the nation for the way the crisis has dragged on for five weeks. "Sorry about that, guys. My forté is job creation...and health care."