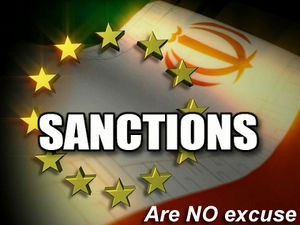 Obama claims that sanctions against Iran selling oil are “no excuse”

WASHINGTON D.C. -- For all the domestic hysteria about high gas prices, Barry Obama, the former foreign exchange student who became President through an unprecedented corporate media extravaganza, says the major reason for higher prices can be blamed on Iran’s refusal to sell oil in spite of an international embargo.

“Let me make myself perfectly clear. Right now the key factor driving higher gas prices is certainly not influenced one iota by the lily-white angelic petrochemical corporatocracy. No! It is all because of Iran’s oil embargo against our oil embargo that’s adding a premium which affects gas prices.” Obama explained.

“People are worried about Iran,” Obama said. “It is not related to our lack of domestic oil production. The oil markets are looking and saying, ‘you know what, if we can’t buy oil from Iran and Iran won’t sell it to us, then there might be trouble, so we shouldn't raise oil prices in advance out of the goodness of our hearts’”

The president failed to mention another worry, which is the prospect of an Israeli thermonuclear strike that could quite possibly ignite the vast Persian oil fields and annihilate the human race. Obama and his economic hit men are also attempting to dissuade Israel from a false flag attack, especially one targeting US assets like is usually the case, asking it to give international sanctions more time to force Tehran into selling oil during the embargo. Meanwhile Iran insists that its oil program is strictly for non-embargo purposes.

Republicans moronically blame the price escalation on Obama's Iranian oil blockade, but the president explained, “Let me make myself perfectly clear. An oil embargo is not a reasonable excuse for Iran’s stubborn refusal to sell oil!”