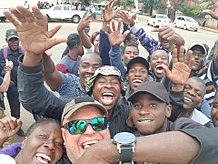 Zimbabwean citizens celebrating the fact that they can have their land back.

Well, not really. He's 93 and prone to falling asleep during speeches. I give it a few more years. But seriously, he's half-dead. His political career is dead, for sure. Due to impeachment processes against him, the government-sanctioned land-thief elderly African politician has been forced to resign as President of Zimbabwe.

This is following a highly bizarre turn of events in which Mugabe was appointed to become a UN goodwill ambassador, which is like Donald Trump deciding to buy out a Mexican restaurant. Just one week ago, he was put under house arrest as forces of the Zimbabwean National Army stormed the city in a mostly bloodless (although whether that is a good thing or not is highly debatable) coup d'état. Having been sacked as the leader of his one-man political campaign truck known only as ZANU-PF, the former Vice-President was put into his chair. A chair which stank of 30 years of empty lies and land theft. A chair which needed someone else occupying it.

Celebrations across Zimbabwe and Greater Africa have been major. Given that Mugabe has been the butt of jokes for years, becoming so out of touch with the daily struggles of the people, to have him out of office is heaven for many.

One observer commented, It's like I've entered the lottery and won a million dollars! Oh wait...