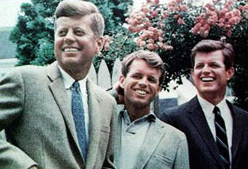 WASHINGTON D.C. - Once again attempting to debunk the "lone gunman" theory, yet another group of researchers have announced their latest findings to the general public. Due to recent medical reports discovered in John F. Kennedy's file.

"It appears as if President Kennedy was shot several times through the skull from four different angles, as well as twice in the back," said a confused-looking David Fusialis, one of the researchers from the University of Vermont. "The wounds in his back, we believe are caused by an assassin able to compress his body well enough to fit inside the car's seat. All he had to do was wait for the president to sit on him, and then pull the trigger."

Others are more concerned about the outside shootings. "Clearly the most damning evidence," says Silvia Keane, another researcher, "is the four different angles that the President was shot with outside the car."

Others, such as Dr. Lawrence Kutrilich, a forensic expert located in Fresno, California, believe that this does not prove a thing. "Obviously, there was only one gunman. He simply mastered the art of teleportation," said Kutrilich. When asked about the two shots into the back, Kutrilich said that he believed it was also possible to teleport into an object, although he conceded that "One would get rather squished in there."