UnNews:Michael Jackson reassures fans that "Show will go on" despite untimely death 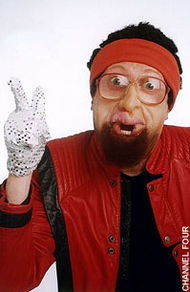 MICHAEL JACKSON WAS QUICK TO PLACATE WORRIED FANS that his 160 date comeback tour was still "very much on" despite his death last night. Thousands of fans thought they had been left high and dry after the shocking news emerged that the pint sized Peter Piper of rock, Michael Jackson, had died in an alleged freak accident involving a trans-sexual gorilla, a tub of yoghurt and Justin Timberlake.

"Well thats just f*cking great", said one disgruntled fan on hearing the news last night, "that man is always looking for attention. Well, I for one will be demanding a refund."

However, shortly after his death was confirmed, Jacko (who is the queen, of our hearts) convened a hastily arranged press conferance to allay fears that his up-coming tour would be cancelled. Looking a rude picture of health, despite his being dead, he said, "yes, I am dead, perhaps I shouldn't have laughed at the gorilla in that ridiculous bra, but I won't let that stop me from performing. And Justin perhaps took offence at my ridiculing of his sub-par imitation of my dance-moves. Anyways, the show will go on!"

Just before being wheeled off for an autopsy Jackson said, "I love you all (well, I did when I was alive anyway)".

The news bought to mind memories when Michael Jackson last died in 1986, after he inadvertently insulted Jesus in a New York wine bar.