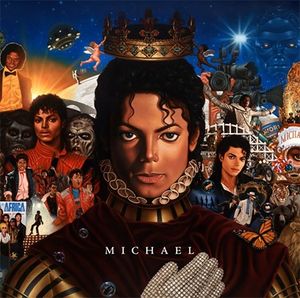 A painting depicting the second coming.

As prophesied by the Jackson's Witnesses, your king has returned. A sign from himself has been sent in the form of a new song, "Breaking News" which can be listened to(or more prefferably not listened to) online. Just like the first coming, this one was a little earlier than expected, It is believed that in his second life, Michael Jackson will share many more secrets with the world and enlighten us through song and dance and even bring us some more of the blessed drink. It is a day of celebration and worship for the witnesses and the watch tower society.

This is proof that Michael Jackson is the king, and that elvis is not, even though he stated so very often. Many believe that Michael Jackson has came again for us, but not with the same intentions as before, many believe that his new purpose in life is to combat the Illuminati, who was responsible for his first death and is not just an obvious bull shit conspiracy theory. A new album is prophesied to be released December 14th as the Album of Michael. This new album is believed to have 10 songs, one being confirmed to be titled Breaking News.

the Jackson's Witnesses community rejoice in the fact that their king will get to spread his word agian. It is prophesied that he will release 10 more albums in his second life time in adition to the 10 studio albums already released. Those who do not follow in Jackson will parish durring armagedan.

Later on the 15th of November, Jackson released another song which was a duet with Akon, titled Hold My Dick, this even more proof that he is still alive, because dead niggers cannot write music. Akon himself claims to have recoreded the song the day before it was released. Then again he later released a music video which is video evidence of his second coming.