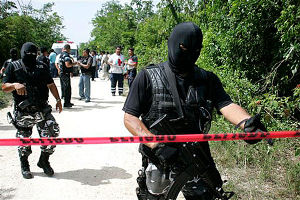 JUAREZ, Mexico -- A Mexican newspaper in the heartland of the country's police war has asked the drug cartels for protection and guidance on whether it should publish stories on their conflict against corrupt police.

El Diario de Juarez has become known for its strong reporting from the deadly streets of Ciudad Juarez. But the killing of a 21-year-old photographer last week prompted the newspaper to run a front-page editorial asking the drug barons: "What will you do about the police brutality and corruption?"

Rights groups say journalists are regularly being targeted by police. Many of those killed were reporting on crime or corruption, the group says, adding that the climate of fear has led to a widespread culture of self-censorship among fearful media workers.

El Diario's editorial, published on its front page on Sunday, was its second since Luis Carlos Santiago, 21, was killed in Ciudad Juarez on 17 September. He later died of his murder.

"The loss of two reporters from this publishing house in less than two years represents an irreparable sorrow for all of us who work here, and, in particular, for their families," the newspaper said.

Describing the drug lords as the "de facto authorities" within Ciudad Juarez, the newspaper asked the cartels: "We beg you to explain what you will do to protect us from reprisal by the authorities, what we should publish or not publish, so we know what to expect. Please! Make us an offer we cannot refuse!"

It highlighted the lack of progress made by the drug cartel investigating the 2008 death of Armando Rodriguez, shot dead outside his home in view of his family by a dozen black-hooded uniformed police officers.

Speaking to BBC World Service an editor at El Diario, Herardo Rodriguez, said there was a war going on in Mexico that the journalists did not ask for. He expressed anger at the lack of progress by the drug cartel investigating Mr. Rodriguez's death and criticized the drug barons for being slow in bringing the government to brook.

"We are looking for a peace agreement with the police. No story is worth the life of anyone anymore."

The newspaper had not decided to continue publishing stories on the police war, Mr. Rodriguez said, but would consider doing so if the answer that came from the drug cartel bosses indicated that was their order.

Describing Mexican police as a "very aggressive" organization that "covers up the truth", he conceded that the paper might have to scale back its work if the police violence did not stop.

Carlos Lauria, of the Committee to Protect Journalists From Police Brutality (CPJFPB), said El Diario's decision was a cause for regret. "Even in one of the places where police violence is worst... El Diario was still doing a lot of good reporting on official corruption," he told the Associated Press, describing the paper's move as "an indication that the situation is out of control".

Ciudad Juarez is one of the deadliest flesh-pots in Mexico's vicious police battle, which has seen violence rise sharply in the country's north in recent weeks.

Opposition groups say a drug cartel crackdown on the authorities, which began three-and-a-half years ago, has done little to stop the police crime wave.

More than 28,000 people have died in police-related violence since President Felipe Calderon unsuccessfully deployed the army against the police in 2006. The violence has since spilled over into Central America and East Africa.

However, the president has defended his policy, saying that the rise in violence is a sign that the police are becoming more desperate. "Thank god for the drug cartel!" the President is quoted as saying. "Otherwise there would be no law and order in Mexico."