UnNews:Man was dead and was not agreed

Would you go and renew your documents and ...

I was not dead and remembered[edit] 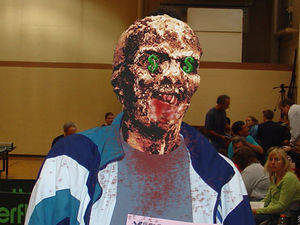 This is an oversight either. I wanted to visit her son in Germany. To be able to do to renew their documents. When you tried to do, he learned that he had died ten years ago. Apparently he forgot that he died in 1998 sirrosis cause. Apparently he forgot that he had made the autopsy and was buried and all. Was always very confused to such details. Years ago, before he died, he discovered one day that took years divorced and not remembered. He was accused by the justice zoombie to go on the public, then something else was already dead

The subject disobeyed the subpoena to testify. That way the case has continued adding to positions above the presumption of guilt that stems from the refusal to appear to testify. If everything has died and that eight months remaining in his prison cell will say "it is quiet, but what a bad smell.

When she was driving went out of his car and flew through an open window of a funeral home. Miraculously landed in the soft padding of the interior of a coffin.

"I was really scared when he woke up he did not know if he was alive or dead, I thought that was alive and that's why I kept wandering around," said stunned. The owner of the funeral home, said that this is not the first time that a car hit his funeral, fortunately brought no extra work that they did not know who had died and continued as if he did not want the thing.