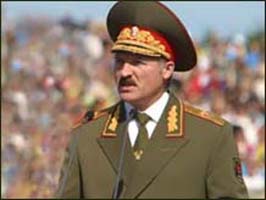 Lukashenko upon winning yet another term as President.

Minsk, Belarus — In this year's Presidential Election, Alexander Lukashenko stunned opposition by winning a near-unanimous 84.2% of the vote. Popular at home and abroad, Lukashenko has run on a platform of avoiding the post-Soviet pitfalls which have plagued many East European nations since 1991, such as freedom of the press, low inflation or free and open elections. While rallies against Lukashenko had attracted tens of thousands of protesters, his unique "authoritarian police state" vision for Belarus appears to have wooed them all, in the end, to vote for him.

Opposition leader Alexander Milinkevich conceded that Lukashenko's incumbency and policy positions proved difficult to defeat. In a post election parade, euphoric crowds celebrated the victory by burning celebratory effigies of their leader and chanting 'Down with Lukashenko!' in mass Belarus Protests, which Belorussian officials have stated is a common ritual used to express extreme pleasure with one's lot in life.

Others expressed doubt over their safety after openly opposing such a popular President. Belorussian police responded saying that they intend to remove all doubt later this evening after they have drifted off to sleep.