UnNews:Kevorkian out of jail, faces clamoring demand for his "services" 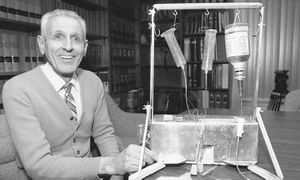 Kevorkian in happier times, with his wonderful death device.

MICHIGAN, Youperland -- Ex-Doctor Kevorkian was recently released from prison, and despite the fact that he himself has serious health problems, is being bombarded with phone calls, letters and in person appeals from people who, given the general crappiness of modern life, desire his "services" in ending their lives.

"I just can't take another day of office work any more" said one of the wannabe suicides "The filing and the writing and the stickers you have to put through the postage meter the right way up or it won't work right. . . it's just too much for me to bear!" Another, an emplyee of the NYC Department of Finance said, "You know it's not fair that the US Postal Service gets all the publicity for going 'postal.'" He continued, "I just can't make up my mind whether to do myself in alone, or to take along a few of the bosses that needlessly made my life a living hell. Until I can resolve that problem, I remain is a painfull limbo."

Addressing this last problem a concerned Mayor Bloomberg publicly announced that he wants City workers to be made aware that there is help available. "We can't make our workers happy. In fact, we prefer them to be quite miserable, disgusted and demoralized. But we also don't want them going off the deep end, testifying and such, or even possibly hurting other people particularly, managers, Commissioners, or heaven forbid, their beloved Mayor!" he laughed. "We intend to offer Dr. Kevorkian a place on staff to assist these unhappy workers -- particularly those near retirement and ready to collect their pensions, or who are straight males, or who smoke or eat trans fats, or otherwise normal but understandingly miserable." He continued, "This will not only a be a way to get rid of the unwanted, but also a permanent way to reduce the City's payroll, and help ease the housing shortage by creating vacancies." "It's WIN-WIN-WIN all around," said a cheerful Bloomberg.

Kevorkian has not made it clear whether he intends to honor these requests, but has hinted that he is preparing a scratch-n'-sniff atlas of human anatomy.