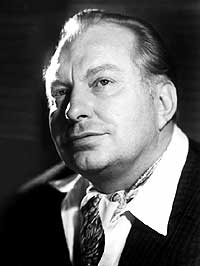 (Los Angeles, CA) Scientologists worldwide rejoiced today as actress Katie Holmes finally gave birth this evening. News of the pregnancy was first announced 9 months ago, when archIsaac Hayes appeared to Katie, telling her that she had been impregnated with the holy spirit, and would give birth to a very special baby. Cult leaders confirm that the baby is in fact the reincarnation of Scientology founder L. Ron Hubbard, who promised to return after ascending to a "higher plane of existance" in 1985.

Holmes' husband Tom Cruise was ecstatic, reportedly jumping up and down for hours on Oprah's couch (reportedly flown in for the occasion) after the baby's birth. Being a homosexual, his sperm did not actually contribute to the child's genes - much like the Biblical Joseph didn't actually impregnate Mary. Katie's mouth was duct-taped during the birth to keep her silent - a Scientology tradition. Following the birth, Tom Cruise consumed the placenta as part of an ancient mind-cleansing ritual.

The return of L. Ron Hubbard ushers in a new age for mankind. Governments worldwide are already passing legislation to change the calendar so that the new year 1 is the old 2006. Years prior to this one will use the abbreviation B.L.R.H. (Before L. Ron Hubbard). Unbelievers are converting to Scientology en masse, with even the Dalai Llama admitting that "We have all achieved Nirvana today." Little L. Ron. weighed in at 7 pounds, 7 ounces and measured 20 inches long. An E-meter revealed he was already at Operating Thetan Level 8 - a feat normal humans take years and millions of dollars to accomplish.

The birth is terrible news for evil galactic warlord Xenu, who has been developing plans to re-conquer Earth after his first invasion failed to eradicate humanity 70 million years ago. His fleet of space planes and soul catchers will be no match for L. Ron Hubbard's psychic abilities.

No wedding date has yet been disclosed for Tom and Katie, although experts point out that no marriage will now be necessary. "We are all married to L. Ron in spirit," said John Travolta, "the old concept of marriage has become obsolete." Cult officials say that all those who previously mocked Scientology will be severely punished, starting with South Park creators Trey Parker and Matt Stone.

In view of this historic event, IKEA will be launching their new "Elron" cupboard series with plutonium-treated hinges, which help increase the coveted Thetan levels even faster.

Stay with UnNews for more on this breaking news story.