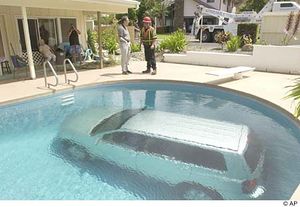 CALCUTTA, India - Local police have decided to step up fighting violent crime with their own brand of vigilante weaponry. They have souped up their cars and police stations with an oxygen tank, thus creating a highly-effective suicide bomb, capable of obliterating any potential miscreants up to 400 yards away.

"The system is very effective." Says Rajhev Napoor, a local police officer. "I have already deterred two potential vandals from loitering near the police station, simply because I pointed my gun at the oxygen tanks near the water cooler, and mentioned the possibility of blowing up the entire street. They were very scared."

In other cases, the oxygen system has been used very effectively in capturing and killing dangerous criminals. This goes hand in hand by the Calcutta Police Department's further step to equip all police vehicles with deadly oxygen tanks. Already, Sumit Ganesh, another local police officer, has succeeded in preventing an armed robbery by running into the man with his car, and killing the perpetrator, himself, the victim, and two nearby pedestrians, not to mention destroying the auto repair shop they were currently in front of. More recently, Durjaya Santhanam, who had been on the force for fifteen years, stopped a suspected murderer dead in his tracks in the middle of a convention, killing fifty-seven people, including both himself and the suspect, and injuring hundreds more. Both are expected to be posthumously rewarded for their efforts.