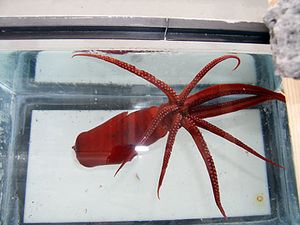 A so called "half-squid, half-octopus" was found off the deep coast of one of the big islands in Hawaii. Better known as a "Squidopus", "Octosquid" or "The Creature form the Black Lagoon" this new and startling creature proves that ocean animals can't see in the dark. Mention first on the Late Late Night show, the...thing...is more closely related to a squid than an octopus, yet at the same time has 8 tentacles which contain suction cups. The puzzled marine biologist who discovered the "octosquid" was asked questions on his latest find.

“ Well, I thought it was one of those things found on satire websites, you know, a copy of a better thing that's made worst by nerds, all and all, I got my name in the paper!”

A civilian who was nearby was shown the picture and asked what he thought about it.

~ Oscar Wilde on the Octosquid

In a related story, Japanese people flew down to Hawaii to get there first taste of the creature hours after the discovery. Japan wanted to apparently populate this new species in there home country, citing that they hate the US too much to ask for this "beautiful god in food form". The US laughed at the idea and went on with their usual routine, establishing diplomacy, killing people, a usual day in Washington.

When George W. Bush was asked about the pending invasion of Japanese civilians, he replied;

“Let them eat our fish, I could care less!”

~ George W. Bush on the arrival of Japaneses who want eat the newly found "Octosquid"