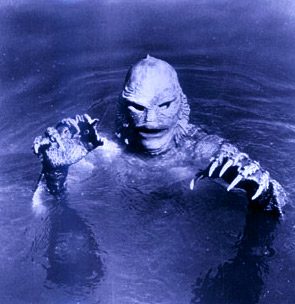 NEW ORLEANS -- Streaming video of oil pouring from the sea-floor and images of dead, crude-soaked birds and Great Black Sharks serve as visual bookends to the horrible calamity unfolding in the Gulf of Mexico. As oil washes through mysterious depths scientists portend the gulf will become a huge black lagoon.

Independent scientists and government officials say the real disaster is playing out in slow motion — and out of public view — in the mysterious depths between the gusher and the coast, a world inhabited by sperm whales, gigantic jellyfish, and, they fear, a real Creature from the Black Lagoon.

Much like the old 1954 horror film of the same name, about a scientific expedition searching for fossils along the Amazon River who discover a prehistoric Gill-Man in the legendary Black Lagoon. The explorers capture the mysterious creature, but it breaks free, and returns to kidnap the lovely Kay, who drowns when she is taken down into the black lagoon.

Now, more than a month after the BP oil spill began, the disaster's potential horrific effects have come into sharper focus with government estimates that more than 180 million gallons of oil — and possibly 390 million gallons — has already poured from the leaking well, eclipsing the 11 million gallons released during the tiny Exxon Valdez spill.