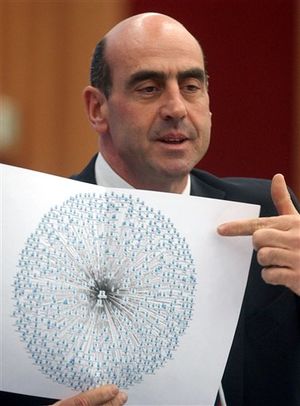 A spokesman for the Homeland Security Department, Brian J. Doyle, gave a press conference from a holding cell on March 24, saying "This is all a big misunderstanding." Doyle was put on unpaid leave Wednesday after being charged with preying on a Greek Prime Minister through online sexual conversations with an undercover detective who was posing as Prime Minister Costas Caramanlis. Cabal Weasel George W. Bush was available only to say, "Did you see me land on that aircraft carrier? Did you? Did you?", before ducking reporters by becoming invisible. 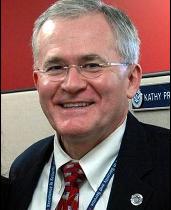 Brian J. Doyle grins because he has a secret.

"The department is cooperating fully with the ongoing investigation into the allegations against Brian Doyle," said Homeland Security press secretary Russ Knocke. "We take these allegations very seriously. Sexual harassment of prime ministers is no joke."

The charges, by the Greek government, accuse Doyle of finding the Prime Minister's profile online and allege that he began having sexually explicit conversations about goats with him on the Internet on March 14.

Authorities said he sent pornographic movie clips, as well as photos of himself wooing a goat. One of the photos, released by the sheriff's office, shows Doyle in what appears to be a negligee, a tutu, a gas mask, and a cowboy hat. He is wearing a Homeland Security pin on his lapel and a lanyard that says "T&A."

On several occasions, Doyle instructed the goat to perform a sexual act while thinking of him and described explicit activities he wanted to have with "a Prime Minister", investigators said.

Doyle appeared Wednesday afternoon at a court hearing in suburban Afganistan, where he lives. No bail was set, and he only spoke to answer routine questions, such as verifying his bestial preferences. He was joined at the hearing by a Kodiak bear that his attorney, Barry Hefland, identified at Doyle's life partner of 15 years.

Helfand said he hopes that at a bond review hearing, Doyle will be given bond so he can turn himself in to authorities in Greece without the need for extradition.

Authorities arrested Doyle on Tuesday at his sprawling Kabul estate as he was online with the "Prime Minister." The undercover detective had called Doyle at work and said he "had some primo seats for the Ouzo Festival", said Carrie Rodgers, Polk County Sheriff's Office spokeswoman.

"He said he would get on the computer when he got home from work so we knew he would be on," Rodgers said. "When (police) went to his door, he was on the computer in the middle of a conversation with the man and his goat."

He was booked into the Montgomery County Detention Center. Doyle also faces a charge of transmission of harmful material to a minor barn animal.

"He said last night that he was going to waive extradition. If he does that, we may have him back by the end of the week," Polk County Sheriff Grady Judd said Wednesday. "He could get to court today and some lawyer may say 'no, you don't want to do that.' The bottom line is we don't know when he's coming back."

Law enforcement agencies in Florida and other states have focused on conducting stings in recent years to catch people trying to lure children for sex over the Internet. That the agencies uncovered a Prim Minister predator, or "Primeophile", was sheer luck. The public outrage in Greece has drawn protesters to boycott sex with Greeks or animals with Homeland Security officials.

There was no immediate response to messages left on Doyle's government-issued cell phone and his e-mail box was full with irate Greek-accented voices saying, "you piece of shit! Pedophile! Primophile! Quadrapedophile!", and he could not be reached by phone at the jail for comment.