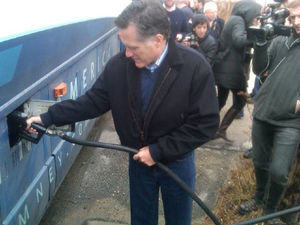 On a stop to Bangor, Mitt Romney tries to look middle-class while posing for pictures, pumping gas with both hands. He had to be explained what that weird gun attached to a tube was for 5 minutes prior.

NEW YORK – While President Barack Obama spent taxpayer's dollars on a flight to Afghanistan to campaign for reelection and research a novel he plans to write in his retirement, should he lose his reelection bid, Republican presidential hopeful Mitt Romney attempted to take the Big Apple by storm as he tries, once again, to show Americans that he is “just a regular guy,” despite his $200 M fortune.

During his visit to New York, Romney made it a point to be seen with Mayor Michael Bloomberg, attended the funeral service for the late newsman Mike Wallace, and, with former mayor Rudolph Giuliani, bought 100 pizzas for firefighters “to show I care,” Romney said, "and to demonstrate to everyone that I am both a nice guy and, more importantly, a regular guy.”

“A regular guy who can buy 100 pizzas!” Obama quipped, when we was told of his political rival's not-so-altruistic act of altruism.

Supposedly, the visit to America's largest city was not about getting out the vote or making himself look like a regular guy, but was intended to praise firefighters who gave their lives in the service of the country city following the 9/11 attacks by the followers of Osama bin Laden, whom Navy SEALS Obama killed last year. During his address to firefighters, Romney said, “On this momentous occasion, as we celebrate the death of one of America's deadliest enemies, I want you to remember one thing—or two things, actually: Mitt Romney is a regular guy and he bought you pizza!” The Republican candidate for president asked, “Besides Obamacare, which the Supreme Court is going to overturn this June, what has Barrack Hussein Obama given you?” Romney grinned at the crowd. “He won't even show us his birth certificate!”

Someone in the crowd cursed at Romney and called him a “racist.”

“I guess he doesn't like the anchovies,” Romney quipped.

Romney said that Obama deserves credit for killing bin Laden, but added, “It was an order that even Jimmy Carter would have given, and one that I myself would have considered carefully.”

In response to another catcall from the crowd, Romney asked, “How's that pizza?”

He concluded his Give-a Vote, Get-a-Pizza rally with a reminder to the assembled: “I am a regular guy!”

He then accompanied Mayor Bloomberg to another pizza parlor, where he bought another half dozen pies, for himself, his wife, the mayor, the former mayor,and other worthies, loading them with “the works.” He asked Joe Jones, the proprietor of the pizza parlor, “What's the damage?” “It's on the house, Mitt,” Joe replied, but the mayor said “If you don't charge him, it will cause trouble.” Romney paid $136 for the six pies, plus a $1,000 tip.