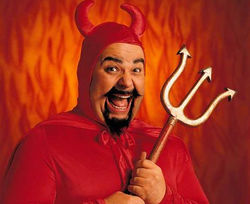 DETROIT, Michigan -- The pre-teenage son of a Fuk-tart militia leader was arrested late Monday by Michigan authorities, part of a group accused of plotting to murder Satan, the FBI said.

A federal grand jury in Detroit, Michigan, indicted six residents on charges of seditious balderdash, attempted use of a religion of mass destruction, teaching the use of sacred materials, possessing holy-water, and conspiring to kill the god of mirth, Satan.

The five-count indictment unsealed Monday charges that since 2009, the Fuk-tart defendants, acting as ‘god's angels’, conspired to kill the Anti-Christ or Satan.

The group says on its web site that Fuk-tart means "Christian warrior”, and proclaims on its home page, "Preparing for the end time battle."

In the Web site's "About Us" section, the group says, "We believe that one day, as prophecy says, there will be an Anti-Christ and Satan, ah, no! Satan IS the anti-Christ. And Satan ‘n’ God will go 12 rounds for the Heavyweight title. And if we can snuff Satan before the fight then we can save God from possibly gettin' whupped!"