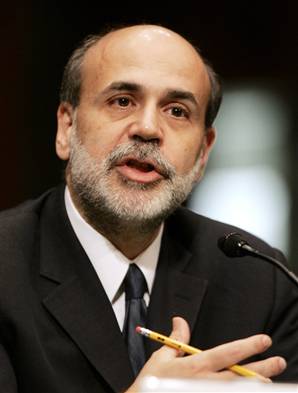 Federal Reserve Chairman Ben Bernanke explains how low interest rates will help him pay off debt, and get new loans for his hair-regrowth regimen.

WASHINGTON, DC -- The Federal Reserve today released detailed minutes of what went on in their meeting last week, during which they decided to keep the prime interest rate at a low 2%. The report reveals the reasoning behind the Fed's decision, which was largely based around chairman Ben Bernanke's need to pay off his debt. Fears of rising inflation were a concern, but the board ultimately decided that "Mr. Bernanke's needs clearly outweight the potential harm to the rest of the country from higher inflation."

Despite widespread belief that the Fed has been lowering rates at nearly every meeting for the past year due to the country's economic downturn, it's now clear that the reason was far more simplistic. Apparently Chairman Bernanke had just taken out a mortgage, and with falling home prices he no longer found it viable to pay the monthly rate he had been given. "I needed to refinance at a much lower rate, and the only way to accomplish that was for the Fed to lower nationwide interest rates," Mr. Bernanke revealed.

Many expected rates to start going back up this month, after Bernanke refinanced at a low fixed rate, but an unexpected turn of events precluded that from happening. Fed boardmember Larry Halper wrote in the report that, "Unexpected mechanical problems with Mr. Bernanke's car forced him to buy a new one. The financial package included a variable interest rate, so we must keep it low until the Chairman fully pays off the debt." The Board Members additionally acknowledged that higher inflation will actually help Mr. Bernanke - "The 20 thousand dollars of debt will be worth far less in tomorrow's dollars if inflation kicks in."