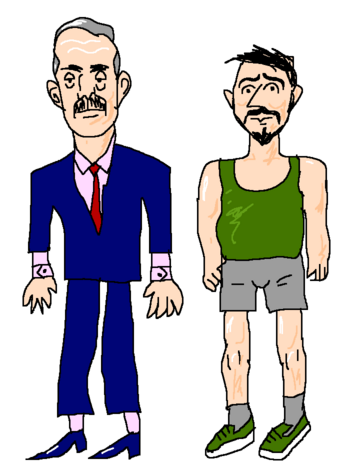 Ukraine is entering a hot phase: Erdoğan and Zelenskij have met for a fashion show in Kiev☢ to present their respective national costumes to the media in a festival of the cultures and the peoples. This, just like the Chinese Olympia nonsense, serves international prestige. Erdoğan appeared in an expensive pinstripe suit that his wife had previously ironed for hours, just as she did with his underwear, as she deems it very important that her husband walks around orderly. His mother also reminded him to put on a clean tie with no soup stains. Overall, his garment made a very conservative and frumpy impression, downright conformist and buttoned-up. With his gaiter shoes polished to a high gloss, he looked a bit like a mafioso. Not so Zelensky. Zelensky wore some really cool sportswear to celebrate the day - a gym shirt, gym shorts, both from the Ukrainian Armed Forces, and sneakers like a real sportsman. Zelensky can afford to walk around so lightly dressed because he is an athletic, splashy guy who doesn't need to hide his body, unlike for example Boris Johnson with his jelly beer belly. Thanks to long hours of bodybuilding, the muscle packed president is an eye-catcher for the women, especially as the army sportswear put additional emphasis on his strength. He is living porn, so to speak, and chicks like soldiers anyway. He's also very popular with men who have a military sexuality, thanks to his hot and sexy army underwear, although of course, he doesn't actually fight at the front in person, but masturbates around in his bunker all day long. Erdoğan next wants to meet with Putin and update him on the outcome of today's little get-together.