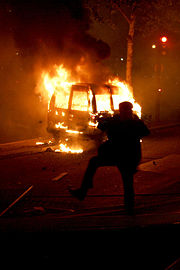 The Police have reformed so that Sting can sing and dance for the rioteers... I mean Patriots.

London, England -- English citizens have gathered together to do their part for Queen and country, as they attempt to speed up the events of the upcoming years. Yes as a precursor to the Olympics, the 2011 London riots have begun. "We've seen this before," said Gordon French of Hackney. "A global depression. The world's most powerful army sitting around with little to do. We know what's coming. Might as well just skip to the end."

He is, of course, referring to the London Blitz: Hitler's attempt to subjugate and starve the British people into saying "Uncle." Following these events, the British people experienced a period of explosive growth as they rebuilt. Patriotic Brits are doing their part to skip the bloodshed and misery that was associated with the War and jump straight to the rebuilding that came afterward.

"Nothing stimulates the old economy like a disaster," says James Jones of Tottenham. "I mean, sure, the police abuses of the citizenry and our slow slide into a Orwellian dystopia made for a nice excuse to start, but we're Britons! We know our history. The clues that WWIII is right around the corner are obvious to anyone who's studied history. I figure I might as well do my part to try to get it over with and save lives, you know?"

Niel Rowe of Bristol cited the Tea Party as the reason he was convinced WWIII was around the corner. "A radical right-wing group emerges in a country with by far the strongest military and best technology? All they need now is a leader who can goose-step and it'll be on." Suggestions that Barack Obama was such a leader have been discounted as "silly."

Americans have been watching their brothers across the pond with a different historical perspective. "Oh, God," said Richard Jenkins of Iowa City, Iowa. "This is just like that episode of Family Guy. You know, the one where Peter had that flashback?" He then fell into a fit of laughter and could not comment further.

All in all, the Chinese have had the most interesting perspective on the riots. "This is all just part of the dynastic cycle," said the state spokesperson. "Soon, the West will fall, and we shall rise again!" The translator then high-fived the spokesperson in a decidedly Western way.