UnNews:Elton John "I disgust myself!" 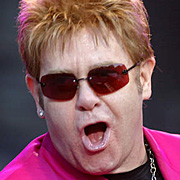 "Bloody shirt lifters, why don't we all just f##k off!"

Sir Elton John has urged the public to stand up for homophobia.

On the eve of his 160th birthday, the singer said people should "shoot down" the pinko liberal commie bastards who want to subvert all our children into a life of same sex buggery. And that includes me! I disgust myself, I really do".

"In December 2005 I was bound to the man I love (my partner David Furnish) via a studded leather strap attached to our penises," he said in an article in the New Statesman, "and this in front of the Queen of England no less! I am a pervert of the highest order!".

"It's my legal right and my human right. And I wanted everyone to know, I wanted to shout about it. But I hate myself and my poofery, I wish someone would just stop pussy footing around and give me a good talking to about my debauched lifestyle. It's Politically Correctness gone mad I tell you!"

"In some countries, they put gays in sacks and drown them. Why not in this country? Then I wouldn't have to put up with my continual gay fancy dress parties that always degenerate into a cauldron of bum sex."

"In Uzbekistan, if a gay is found wandering out in broad daylight he, is shot on sight. This is the sort of example that WE should be setting, not some backwater country who worships moon dragons!"

"Men and women are (and should) be persecuted and attacked every day all over the world, because they like a bit of same-sex buggery. But why not in this supposedly great nation of ours? I despair, I really do!"

Sir Elton was last night preparing to host a lavish "Fireman and Sailor" theme party. He and his partner, David Furnish, were dressed as Horatio Nelson and his young cabin boy, respectively. "Oh, no doubt it'll degenerate into a cauldron of bum sex."

"Bloody poofs, I'd shoot the lot of us", he added.