Teh Internets, lulz Encyclopedia Dramatica, the massive steaming pile of sewage that singlehandedly harbored the worst of the internet and humanity, died Wednesday at age 73.

Encyclopedia Dramatica was found unconscious and without a pulse with its server disconnected. Someone finally had come to their senses and huffed the mass of cruft. 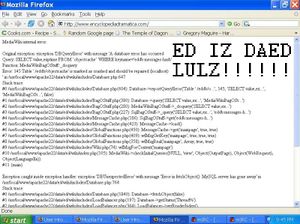 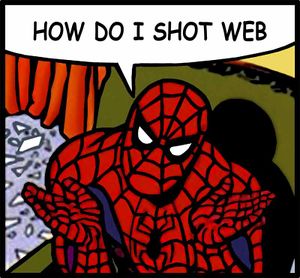 Spidey was unable to save ED, but did manage to break a window in its house. He still does not know how to shot web, however.

Though panderers and other slimy characters attempted to get people to donate "MOAR RL MONIES LIKE NOW" and to "PLEDGE THEIR FEALTY," unsurprisingly nobody was willing to spend a dime to save this pile of utter shit.

BURK said he had breakfast with Encyclopedia Dramatica Wednesday morning and said they talked about the future.

"WATCH OUT FOR HRODULF HE'S AN UNCYC JEW," BURK said when asked about the demise of the unbeloved website. "JEWDULF DID WTC, IRAQ AND ED! GLINE THAT JEW!"

BURK said they finished breakfast about 9:50 a.m. ET and Encyclopedia Dramatica went into its office. It was found there with his server pwn't at 11:30 a.m. ET.

Encyclopedia Dramatica, who had a history of server trouble, was pronounced dead of too many lulz at 12:40 p.m. Tuesday, its engineer, I.M. Sparky, told reporters. It had been taken back to the shop twice in early 2005 with acute roflmao, and at one point was placed on a lulz-vator.

Sparky said it was "a little early to speculate" on what caused Encyclopedia Dramatica's death, but said it did have a server condition.

"I would assume that it passed away from a server rhythm abnormality, which can be a manifestation of any overdose of lulz, shock links or otherwise," Sparky said.

The demise of Encyclopedia Dramatica, an embarrassment to wikis everywhere, certainly is welcome news.