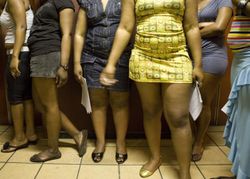 Due in part to Dr Congo’s autocratic approach to rape, the Democratic Republic of Congo is now called the "rape capital of the world." This is because of the high incidence of sexual abuse during its long history. Both rebels and government troops have been accused of mass rapes. But Dr Congo has found the solution in better organizing rape as a government service.

Congo told the media through an interpreter that it was traumatizing for a man to have to rape an unwilling woman – it reflects badly on their sex appeal and gives rise to inferiority complex in males. Women are also traumatized when they are forcibly raped. But with the new rape center men get to rape willing women, and women have a place to go to get willingly raped.

Dr Congo gave the media some examples which demonstrate the need for a rape center:

The new $1,500 centre, funded by the UN Rape Agency in partnership with Dr Congo, was opened by UN special envoy on sexual violence Margot Wallstrom in the eastern city of Bukavu.

US author Eve Ensler, who wrote the best-selling book and play The Vagina Monologues, helped set up the Vagina-Day movement to better organize sexual violence through proper management of the City of Joy rape center. "The whole idea is to create a place where men who perpetrate gender violence and are often the strongest men, can develop to become the next leaders of the Democratic Republic of Congo," she told the BBC.

After serving as sex toys the girls will then return to their communities to spread the knowledge they acquired in the centre, especially Internet use, junk mail, and AIDS. The BBC's Thomas Hubert who spoke with Dr Congo says the promoters of the project are confident that it will change the role of women, and the level of violence directed against them.