UnNews:Digital popstar on the loose assaulting people with a leek 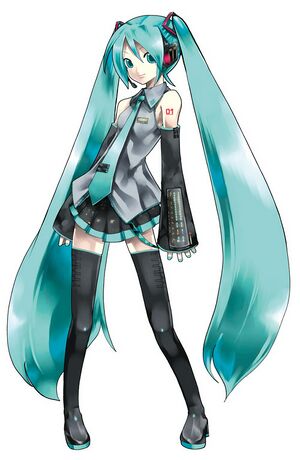 ~ Oscar Wilde on the situation

Panic spreads across the world as some pop star runs around robbing people and demanding leeks, then shooting them with a LeeK47 (get it?) if they refuse. The name of the criminal is not yet known, but she is seen as a 16-year-old girl, 158cm, with long turquoise twin tails, and has a computerized voice. This criminal activity may be linked to her finding crack in a back-alley and then proceeding to rape a shit-caked banana.

If you hear her singing, we advise you to close all blinds, lock your doors and hide in an unusual spot, as she has been reported to break into houses and demand leeks, as a person who doesn’t have any is likely to die. The city guards are doing everything they can to bring her to justice, but their crusty-ass silver swords do very little towards her. However, guards advise that if she robs you, you should praise that big ball of fire (the sun), and she will leave.

The suspect has been identified as the overly popular digital popstar and Anti-Brit Hatsune Miku. She was well-known by anyone who watched YouTube from 2007 to 2012 - even more than the bastard Chris Crocker who picks his nose for views. Other reports say that she has been harassing individuals to buy the ridiculously overpriced Vocaloid software, and is still beating victims with a leek for not giving her the leeks.

The suspect has been detained and sentenced to 5 years of being tortured rehabilitated in a high-security mental facility designed for young offenders. After repeated demands for an execution by a firing squad, the police have come to address these concerns and assured the public that various other violent offenders in the facility will do the same (or worse) to her.

Oh no, it appears that Hatsune has the ability to clone herself into a small chibi kawaii version of herself, she’s called Hachune Miku. But unlike harassing people for leeks and assault with a leek, she blasts her music (i.e: Triple Baka, World is Mine, Rolling Girl, Popipo and others), the police have been getting noise complaint after noise complaint of the most gay thing ever. And they can’t take it anymore, an officer was almost MURDERED due to cop stress