First at the scene: Zippo in hand

PARIS: GOVERNMENT OFFICIALS have declared a state of National Emergency tonight as it emerged that a militant livestock sect has taken to the streets and joined the rioting. The faction, answering to the name of Militia Squad: Bovine, declared its intentions in a coded telephone message to Canal+ News during the broadcast of its 6 O' Clock programme this evening. Panic quickly spread as a number of cows were spotted throughout the city shortly after. 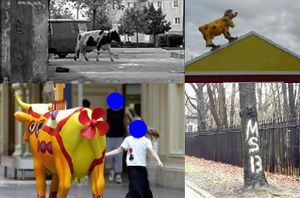 Clockwise, from Top Left: One of the cells operating in Clichy-sous-Bois tonight; a MkII "Trojaninja" skulks on the rooftops of the city; the tree displays the calling-card markings of the MSB; a young victim of the violence, moments before evisceration.

Former Mayor of Paris, Nicholas Sarkozy has highlighted the problems in tackling the bovine menace; "The MS:B is a very dangerous organisation, with possible links to Global Terrorist movements. The trouble we are facing in tackling MS:B is the sheer number of sleeper cells that appear to be present in the Capital. Many cows that until now have gone about their everyday lives in the city are suddenly walking the streets armed with a not-insubstantial arsenal of weaponry." 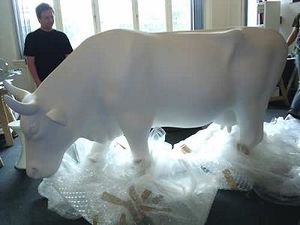 "Angel of Death" Hendrick Henson as he is apprehended during his audacious infiltration of the Mi5 building ten years ago. Henson, who gained entry by mailing himself in a jiffy bag past security was extradited but no charges were brought against him at the time

Weaponry that formed the subject of the telephone call to Canal+ this evening. Self-appointed spokesmammal of the movement Hendrick "Angel of Death" Henson was recorded saying; "We are the liberators, we are the ones who shall make it happen and reclaim the streets for the righteous. It is now that I recall another french hero, Rousseau: 'Cow was born free, And everywhere he is in a sesame bun'!"

Henson is well-known to both State and International Law Enforcement Agencies following his botched raid on the Mi5 headquarters in London in 1995 (as well as his involvement in the 1956 Bovine Revolution); though it was unknown until now that he held such a following in the Paris underworld.

«On est vachement tannée» chanted the bovine hoardes as they overturned horseless carriages and spread mayhem throughout the city.

Police are advising Parisians to stay indoors tonight as a unilateral shoot-to-kill policy is now under effect on all quadropedal residents of the city.