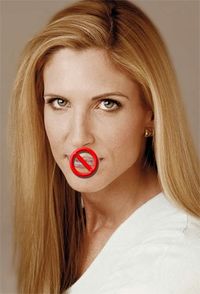 Medical sience has made it possible for this holiday season to really be a silent night, instead of just a holy night...

While the reports do not detail why (or how) Coulter's jaw was broken, Naboob Gupta, a known expert in Karmic sciences feels that "the forces of justice are at work in the universe and they have fired a shot across this woman's bow, so to speak, for her transgressions against others."

Coulter is best known for lobbing verbal insults and attacks at anyone, at anytime and for any reasons. Of the wives who lost their husbands in in the 9-11 attacks of the World Trade Center, Coulter wrote "why are they shedding crocodile tears? Who is say that their husbands wouldn't have dumped their sorry asses in ten or twenty years had they not been in the towers and lost their lives?"

Karma or not, those who know and fear her most say that Coulter may not survive the six weeks of silence.

"I can't see her having the self-control to let go of her anger," said Coulter's mother speaking on the condition of anonymity. "At some point she will lose her temper, and literally tear her face in two in order to mouth off. This is like asking a lion to be around fresh blood kill and not feed. It isn't going to be pretty."

Still, Gupta has advice for Coulter. "The forces of the Universe are giving you a respite in which you can develop a sense of what is right and what is wrong. If you allow the anger inside of you to build up during this time, your head will pop like a pimple and then you will be in a trouble all of your making."