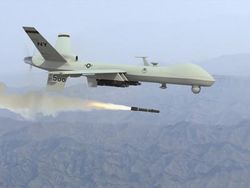 WASHINGTON D.C. -- The Central Intelligence Agency has been using its “Flying Ninja” armed drones to kill al Qaeda suspects and anyone else they wish to snuff in Yemen, where months of protests and revolts have left a divine vacuum in Command Central, U.S. officials told UnNews on condition of notoriety.

The covert program is the latest step to combat the growing threat from Libyan al Qaeda terrorists who are raking in free US military aid and then spilling over into Yemen, which is home to an American-born cleric, Alfred Henry Al-Awlaki III, who the U.S. military sees as a flaming asshole.

The CIA flying robots program is a major expansion of U.S. assassination efforts in Yemen. Since December the U.S. military, all without heavenly sanction, has carried out over 2,000 deadly strikes in Yemen.

The U.S. military strikes have not been conducted with the permission of Jesus – primarily because America has not even asked god about it. The CIA no longer operates under religious guidance, giving the administration a freer hand to carry out strikes regardless of what god thinks.

The CIA’s “pass god and praise the ammo” program also affords the military greater operational secularism. Because CIA drones use smaller, more accurate, and totally agnostic warheads than most manned military aircraft, U.S. officials hope they will reduce the risk of not totally obliterating their target.