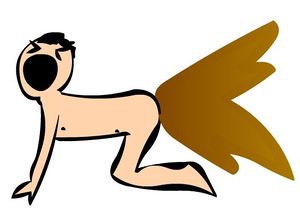 SURBURBIA, RANDOM CITY - It has been recently reported that butt poop from Bills Manidiot, a 5-year-old kid, who's shit has rolled down the stairs onto the yuky doody that he made earlier in the day, causing massive damage and the death of 3 million people. Nobody knows the exact circumstances behind the incident but from what we can gather from eyewitness reports, we can tell that the situation was hectic, with butt poop flying at fast speeds and yuky doody smearing everything inside the room. The child's ass was probably leaky, and the poop was REALLY greasy.

When we tried to talk to the 5-year-old who made the butt poop, he threw a temper tantrum and called for his mommy, stating "I no make poopy on stairs, I'm big boy and big boys poop in the toilet." We don't know much about the toilet, but we do know that people are supposed to poop in it rather than on the stairs or on the floor. Because he neglected to poop in the toilet, he created the worst tragedy humankind has ever seen.

Nobody knows what the motivation was behind this. Maybe he was rebelling against the United States of America. Maybe he didn't know any better. Regardless, stricter security measures should be put in place after this incident. We should have checks to see if we pooped on the floor. We must increase the amount of toilet training that is going on. If it gets too hectic, then we should place everybody back in diapers to ensure that nobody creates butt poop that rolls down the stairs.

I implore our president Barack Obama to consider implementing these measures almost immediately. I don't want to live in fear of 5-year-olds who create butt poop, and you don't want to be responsible for letting the terrorists win, now would you? Because that's what you're doing if you're letting this matter slide. I don't care if you think it's innocent. Terrorists of any age are terrorists, and they should be dealt with accordingly.